Be guided by the questions

Statistical techniques are useful to expose the hidden information. They work by getting rid of the extraneous or misleading bits of data, and by accentuating the most informative parts. A statistical graphic distinguishes itself by not showing all the raw data. 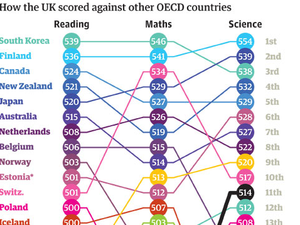 Here is the Guardian's take on the OECD PISA scores that were released recently. (Perhaps some of you are playing around with this data, which I featured in the Open Call... alas, no takers so far.) I only excerpted the top part of the chart.

This graphic is not bad, could have been much worse, and I'm sure there are much worse out there.

But think about this for a moment: what question did the designer hope to address with this chart? The headline says comparing UK against other OECD countries, which is a simple objective that does not justify such a complex chart.

The most noticeable feature are the line segments showing the correlation of ranks among the three subject areas within each country. So, South Korea is ranked first in reading and math, and third in science. Equally prominent is the rank of countries shown on the left-hand-side of the chart (which, on inspection, shows the ranking of reading scores); this ranking also determines the colors used, another eye-catching part of this chart. (The thick black UK line is, of course, important also.)

In my opinion, those are not the three or four most interesting questions about this data set. In such a rich data set, there could be dozens of interesting questions. I'm not arguing that we have to agree on which ones are the most prominent. I'm saying the designer should be clear in his or her own mind what questions are being answered -- prior to digging around the data.

***
With that in mind, I decided that a popular question concerns the comparison of scores between any pair of countries. From there, I worked on how to simplify the data to bring out the "information". Specifically, I used a little statistics to classify countries into 7 groups; countries within each group are judged to have performed equally well in the test and any difference could be considered statistical noise. (I will discuss how I put countries into these groups in a future post, just focusing on the chart here.)

Here is the result: (PS. Just realized the axis should be labelled "PISA Reading Score Differentials from the Reference Country Group" as they show pairwise differences, not scores.) Each row uses one of the country groups as the reference level. For example, the first row shows that Finland and South Korea, the two best performing countries, did significantly better than all other country groups, except those in A2. The relative distance of each set of countries from the reference level is meaningful, and gives information about how much worse they did.

(The standard error seems to be about 3-6 based on some table I found on the web, which may or may not be correct. This value leads to very high standardized score differentials, indicating that the spread between countries are very wide.

I have done this for the reading test only. The test scores were standardized, which is not necessary if we are only concerned about the reading test. But since I was also looking at correlations between the three subjects, I chose to standardize the scores, which is another way of saying putting them on an identical scale.)

Before settling on the above chart, I produced this version: 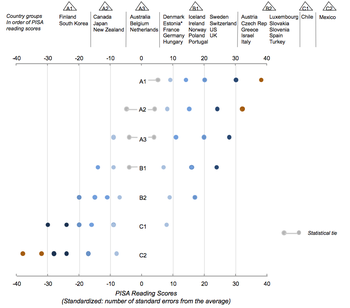 Before that, I tried a more typical network graph. It looks "sophisticated" and is much more compact but it contains less information than the previous chart, and gets murkier as the number of entities increases. Readers have to work hard to dig out the interesting bits. 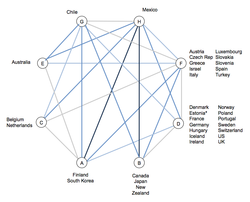 I noticed a burst of activity on Twitter with "Junk Charts" nominations, too many for me to take care of. So, I'm trying a new feature, the Open Call. It's your chance to start the conversation on these charts. 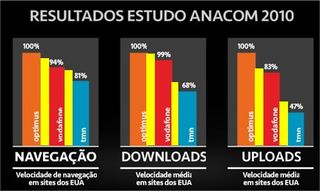 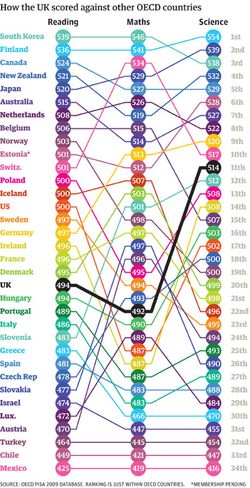 "the BBC normally do a good job but this is junk, impossible to compare GDP figures" (link to chart)