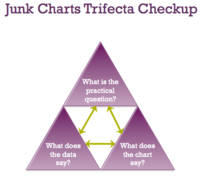 The Junk Charts Trifecta Checkup is a general framework for data visualization criticism. It captures how I like to organize the thinking behind my critique pieces.

The need for such a framework is clear. Opinion pieces on specific data graphics frequently come across as stream of conscience. Proclaiming a chart "mind-blowing" or "worst of the century" isn't worth much if the author cannot articulate why. The state of dataviz criticism has not progressed further than assembling a set of "rules of thumb".

In putting this framework together, I aimed to make it simple to use and broadly applicable. The Trifecta Checkup involves only three investigations:

Ideally, the results of all three investigations are one and the same.

The Question occupies the top corner because any data visualization project needs a worthy cause. I'd like the Question to be well-posed, and interesting; the former focuses the search for appropriate data while the latter ensures an engaged audience.

The Data should be relevant to the Question being addressed. Relevance can often be augmented by reducing noise, removing errors or transformations.

The Visual elements should represent the Data in a clear, concise manner, addressing the Question directly.

The tradition of Tufte is heavily focused on the Visual corner of the Trifecta, including its linkage to the Data corner. As will be discussed later, it is possible to select the right graph for the data but the project to fail because the data do not solve the posed question.

In using this framework, I often start at the top and loop counterclockwise.

The Trifecta Checkup framework establishes a taxonomy of dataviz critique. There are eight types of critiques: each is presented with an icon, and accompanied with an example from a prior post on Junk Charts. (If you find better examples, please send them to me.)

Everything is in sync, and the chart has no weaknesses.

Example: Josh Katz’s dialect maps (link) is a fine case of using a great design to reveal interesting spatial patterns in a set of good data that addresses an interesting question.

Some charts use a good source of data effectively presented in a visual display. However, the effort fails because of a poorly defined objective, or an unengaging premise.

Example: The global liquor consumption chart (link) does a great job with some UN data in a small-multiples presentation but it’s not clear why the question is interesting.

Some designs emerge from well posed and interesting questions, and the graph is well executed. The problem here is the data, which fail to illuminate the question. Typically the data only tangentially concern the topic, or certain adjustments are wanting, or there is a quality concern.

Example: NYT’s CPI Component Price Drop chart (link) suffers from over-processed data but the chart is well-executed and the question being addressed is important and relevant.

Despite having a good data source and an interesting, well-posed problem, the visual design hides or confuses the message. These charts have long provided fodder for Tufte, Wainer and the like.

Example: Arctic Ice Death Spiral (link) concerns an existential problem, and as far as I know, the data are standard fare but the chart fails because of the spiral design.

The graphical elements follow best practices, and present the data well. This effort is in vain, because of poor data quality, and an unclear objective.

Example: NYT’s Mirth and Taxes scatter plot (link) has commendable production values but this difficult problem is tough to nail down, and finding good data is hard.

The data has been properly collected and processed. However, the question being addressed has not been clearly defined, and the graphical design fails to bring out the key features of the data.

Example: New York City 311 Calls by the hour (link) visualizes a good dataset but it’s hard to know what the motivating question is, the insights are mundane, and further confused by the use of the streamgraph.

An interesting question has been posed. The data fail to convince, and the cause is not helped by poor execution of the graphical elements.

Example: The chart about the unfulfilled promise of long-tail music sales (link) draws us in with a nice question but the data do not give a good answer, and the visual elements are poorly executed.

These graphical disasters do not get anything right.

If you use the Trifecta Checkup framework, every critique you produce for a particular chart falls into one of these eight types. If I ever get an intern's help, I will classify all of the thousands of posts on Junk Charts, so we can figure out what are the most common problems with dataviz!

Please use the framework, and send me feedback.