The time has arrived for cumulative charts

Long-time reader Scott S. asked me about this Washington Post chart that shows the disappearance of pediatric flu deaths in the U.S. this season: 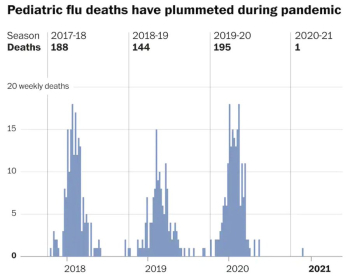 The dataset behind this chart is highly favorable to the designer, because the signal in the data is so strong. This is a good chart. The key point is shown clearly right at the top, with an informative title. Gridlines are very restrained. I'd draw attention to the horizontal axis. The master stroke here is omitting the week labels, which are likely confusing to all but the people familiar with this dataset.

Scott suggested using a line chart. I agree. And especially if we plot cumulative counts, rather than weekly deaths. Here's a quick sketch of such a chart: 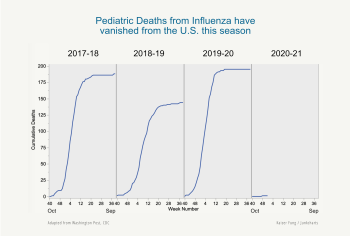 (On second thought, I'd remove the week numbers from the horizontal axis, and just go with the month labels. The Washington Post designer is right in realizing that those week numbers are meaningless to most readers.)

The vaccine trials have brought this cumulative count chart form to the mainstream. For anyone who have seen the vaccine efficacy charts, the interpretation of the panel of line charts should come naturally.

Instead of four plots, I prefer one plot with four superimposed lines. Like this: 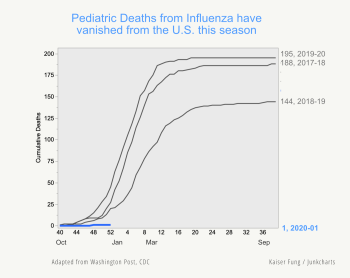