I mentioned the September special edition of Bloomberg Businessweek on the election in this prior post. Today, I'm featuring another data visualization from the magazine. 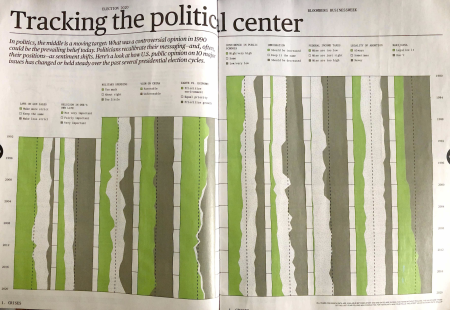 Here are the rightmost two charts.

Each chart covers a political issue. These two charts concern abortion and marijuana.

The marijuana question (far right) has only two answers, legalize or don't legalize. The underlying data measure the proportions of people agreeing to each point of view. Roughly three-quarters of the population disagreed with legalization in 1980 while two-thirds agree with it in 2020.

Notice that there are no horizontal axis labels. This is a great editorial decision. Only coarse trends are of interest here. It's not hard to figure out the relative proportions. Adding labels would just clutter up the display.

By contrast, the abortion question has three answer choices. The middle option is "Sometimes," which is represented by a white color, with a dot pattern. This is an issue on which public opinion in aggregate has barely shifted over time.

The charts are organized in a small-multiples format. It's likely that readers are consuming each chart individually.

What about the dashed line that splits each chart in half? Why is it there?

The vertical line assists our perception of the proportions. Think of it as a single gridline.

In fact, this line is underplayed. The headline of the article is "tracking the political center." Where is the center?

Until now, we've paid attention to the boundaries between the differently colored areas. But those boundaries do not locate the political center!

The vertical dashed line is the political center; it represents the view of the median American. In 1980, the line sat inside the gray section, meaning the median American opposed legalizing marijuana. But the prevalent view was losing support over time and by 2010, there wer more Americans wanting to legalize marijuana than not. This is when the vertical line crossed into the green zone.

The following charts draw attention to the middle line, instead of the color boundaries: 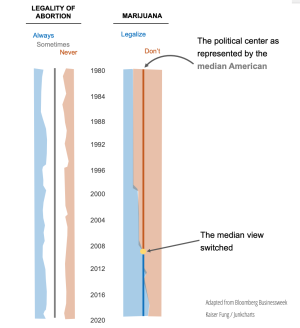 On these charts, as you glance down the middle line, you can see that for abortion, the political center has never exited the middle category while for marijuana, the median American didn't want to legalize it until an inflection point was reached around 2010.

I highlight these inflection points with yellow dots.

The effect on readers is entirely changed. The original charts draw attention to the areas first while the new charts pull your eyes to the vertical line. 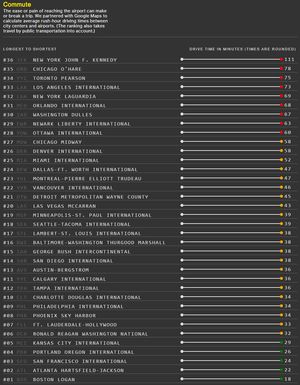 ZeroHedge got this from Bloomberg Businessweek, which has a data visualization group so this seems strange. The project called "The Airport Frustration Index" is here.

It turns out the above chart is a byproduct of interactivity. The designer illustrates the passage of time by letting lines run across the page. The imagery is that of a horse race. This experiment reminds me of the audible chart by New York Times (link).

The trick works better when the scale is in seconds, thus real time, as in the NYT chart. On the Businessweek chart, three different scales are simultaneously in motion: real time, elapsed time of the interactive element, and length of the line. Take any two airports: the amount of elapsed time between one "horse" and the other "horse" reaching the right side is not equal to the extra time needed but a fraction of it--obviously, the designer can't have readers wait, say, 10 minutes if that was the real difference in commute times!

Besides, the interactive component is responsible for the uninformative end state shown above.

Now, let's take a spin around the Trifecta Checkup. The question being asked is how "painful" is the commute from the city center to the airport. The data used:

Here are some issues about the data worth spending a moment of your time:

In Chapter 1 of Numbers Rule Your World (link), I review some key concepts in analyzing waiting times. The most important concept is the psychology of waiting time. Specifically, not all waiting time is created equal. Some minutes are just more painful than others.

As a simple example, there are two main reasons why Google Maps say it takes longer to get to Airport A than Airport B--distance between the city center and the airport; and congestion on the roads. If in getting to A, the car is constantly moving while in getting to B, half of the time is spent stuck in jams, then the average commuter considers the commute to B much more painful even if the two trips take the same number of physical minutes.

Thus, it is not clear that Google driving time is the right way to measure pain. One quick but incomplete fix is to introduce distance into the metric, which means looking at speed rather than time.

Another consideration is whether the "center" of all business trips coincides with the city center. In New York, for instance, I'm not sure what should be considered the "city center". If all five boroughs are considered, I heard that the geographical center is in Brooklyn. If I type "New York, NY" into Google Maps, it shows up at the World Trade Center. During rush hour, the 111 minutes for JFK would be underestimated for most commuters who are located above Canal Street.

I'd consider this effort a Type DV.

Hedge-fund bubbles are not nice 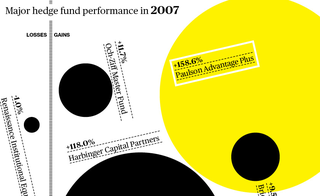 Unmoored bubbles, slanted text, positive and negative returns undifferentiated, bubble within bubble, paired data scattered apart, and it's not even that attractive.

Here is a Bumps-chart style version of this data: 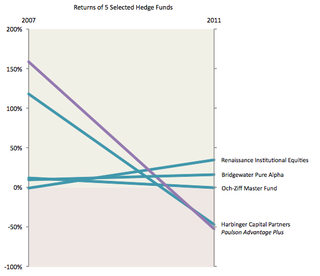 The author never explained how the five funds were chosen so it's hard to know what's the point of the chart. It appears like Harbinger Capital Partners had a similar experience as Paulson. In addition, given the potentially huge gyrations from year to year, it's very odd that we are not shown the annual returns between 2007 and 2011... we can't be sure that some of the three other funds suffered a particularly bad year in between the end points shown here.

This panel chart appeared in an article about solar panels in Business Week.  Not understanding this one at all. 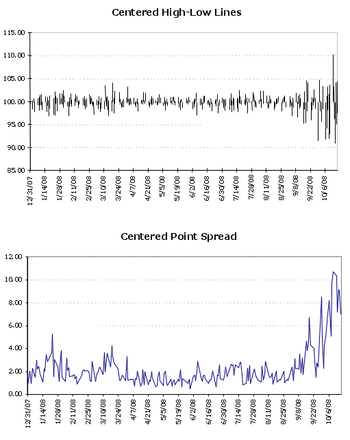 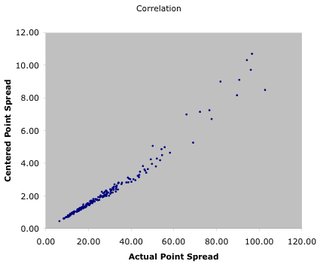 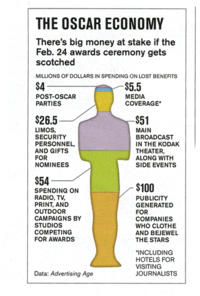 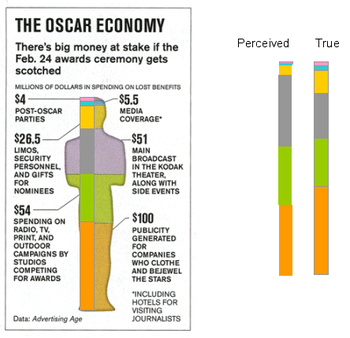 Here is one terrific map, courtesy of Ray Vella at Business Week. 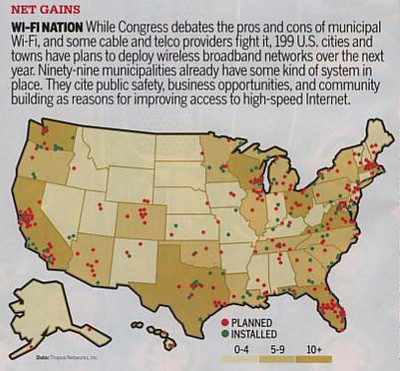 This map works on two levels:

What's more, we can assimilate the city and state levels.  For example, focusing on Texas, we see from the dark brown shade that it is a state with many networks, and then from the dots, we can see further where those networks are.

A few minor improvements can be made:

Finally, most readers will find the number of networks to be a dissatisfactory metric because more populous states will likely install more networks.  A density measure such as networks per person or per household or per unit area would have been more telling.