I captured the following image of an ad at the airport at the wrong moment, so you can only see the dataviz but not the text that came with it. The dataviz is animated with blue section circling around and then coming to a halt.

The text read something like "75% of the people who saw this ad subsequently purchased something". I think the advertiser was TripActions. It is an app for accounting. Too bad their numbers people don't know 75% is three-quarters and their donut chart showed a number larger than 75%.

Browsing around the TripActions website, I also found this pie chart. 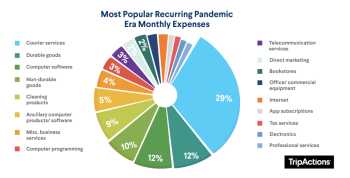 The radius of successive sectors is decreasing as the size of the proportions shrinks. As a result, the same two sectors labeled 12% at the bottom have differently-sized areas. The only way this dataviz can work is if the reader decodes the angles sustained at the center, and ignores the areas of the sectors. However, the visual cues all point readers to the areas rather than the angles.

In this sense, the weakness of this pie chart is the same as that of the racetrack chart, discussed recently here.

The pie chart isn't just misleading, it's clearly incorrect. There is no way that the difference between 5% and 9% slices is correct even just taking angle into account. Therefore there's not reason to believe that the numbers in any of the pies are related at all to the actual slice size.

I did a few measurements. The only part of the pie that matches close to the stated percentage is the biggest one. After that numbers aren't related to angles *or* area.