Found an old one sitting in my folder. This came from the Wall Street Journal in 2018. 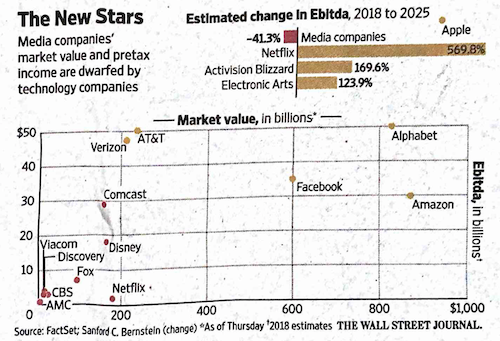 At first glance, the chart looks like a pretty decent effort.

The scatter plot shows Ebitda against market value, both measured in billions of dollars. The placement of the vertical axis title on the far side is a little unusual.

Ebitda is a measure of business profit (something for a different post on the sister blog: the "b" in Ebitda means "before", and allows management to paint a picture of profits without accounting for the entire cost of running the business). In the financial markets, the market value is claimed to represent a "fair" assessment of the value of the business. The ratio of the market value to Ebitda is known as the "Ebitda multiple", which describes the number of dollars the "market" places on each dollar of Ebitda profit earned by the company.

Almost all scatter plots suffer from xyopia: the chart form encourages readers to take an overly simplistic view in which the market cares about one and only one business metric (Ebitda). The reality is that the market value contains information about Ebitda plus lots of other factors, such as competitors, growth potential, etc.

Consider Alphabet vs AT&T. On this chart, both companies have about $50 billion in Ebitda profits. However, the market value of Alphabet (Google's mother company) is about four times higher than that of AT&T. This excess valuation has nothing to do with profitability but partly explained by the market's view that Google has greater growth potential.

Unusually, the desginer chose not to utilize the log scale. The right side of the following display is the same chart with a log horizontal axis.

The big market values are artificially pulled into the middle while the small values are plied apart. As one reads from left to right, the same amount of distance represents more and more dollars. While all data visualization books love log scales, I am not a big fan of it. That's because the human brain doesn't process spatial information this way. We don't tend to think in terms of continuously evolving scales. Thus, presenting the log view causes readers to underestimate large values and overestimate small differences.

Now let's get to the main interest of this chart. Notice the bar chart shown on the top right, which by itself is very strange. The colors of the bar chart is coordinated with those on the scatter plot, as the colors divide the companies into two groups; "media" companies (old, red), and tech companies (new, orange).

At this point, you may have noticed the stray orange dot. Look carefully at the top right corner, above the bar chart, and you'll find the orange dot representing Apple. It is by far the most important datum, the company that has the greatest market value and the largest Ebitda.

I'm not sure burying Apple in the corner was a feature or a bug. It really makes little sense to insert the bar chart where it is, creating a gulf between Apple and the rest of the companies. This placement draws the most attention away from the datum that demands the most attention.

> the "b" in Ebitda means "before", and allows management to paint a picture of profits without accounting for the entire cost of running the business

No measure is perfect, but an alternative view of this (and a reason that many analysts prefer EBITDA) is that it can give them a more accurate measure of the cash the business is generating that is independent of capital structure and major sources of tax-motivated accounting trickery