Bloomberg did a very nice feature on how drought has been causing havoc with river transportation of grains and other commodities in the U.S., which included several well-executed graphics. 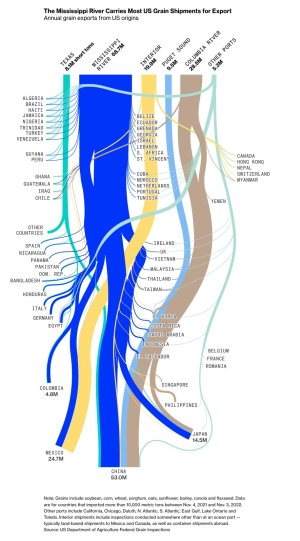 I'm particularly attracted to this flow chart/sankey diagram that shows the flows of grains from various U.S. ports to foreign countries.

Here are some things one can learn from this chart:

Some key questions are not as easy to see from this layout:

Some of the features that make the chart look pretty are not data-driven.

See this artificial "hole" in the brown branch. 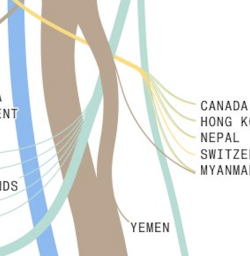 In this part of the flow, there are two tiny outflows to Myanmar and Yemen, so most of the goods that got diverted to the right side ended up merging back to the main branch. However, the creation of this hole allows a layering effect which enhances the visual cleanliness.

Next, pay attention to the yellow sub-branches: 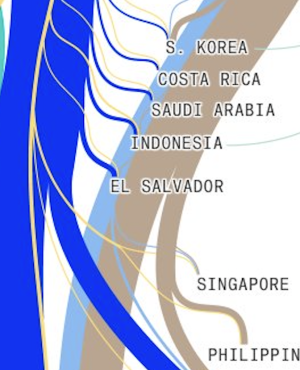 At the scale used by the designer, all of the countries shown essentially import about the same amount from the Interior (yellow). Notice the special treatment of Singapore and Phillippines. Instead of each having a yellow sub-branch coming off the "main" flow, these two countries share the sub-branch, which later splits.