A Twitter user pointed me to this article from Washington Post, ruminating about the correlation between gas prices and measures of political sentiment (such as Biden's approval rating or right-track-wrong-track). As common in this genre, the analyst proclaims that he has found something "counter intuitive".

The declarative statement strikes me as odd. In the first two paragraphs, he said the data showed "as gas prices fell, American optimism rose. As prices rose, optimism fell... This seems counterintuitive."

I'm struggling to see what's counterintuitive. Aren't the data suggesting people like lower prices? Is that not what we think people like?

The centerpiece of the article concerns the correlation between metrics. "If two numbers move in concert, they can be depicted literally moving in concert. One goes up, the other moves either up or down consistently." That's a confused statement and he qualifies it by typing "That sort of thing."

He's reacting to the following scatter plot with lines. The Twitter user presumably found it hard to understand. Count me in. 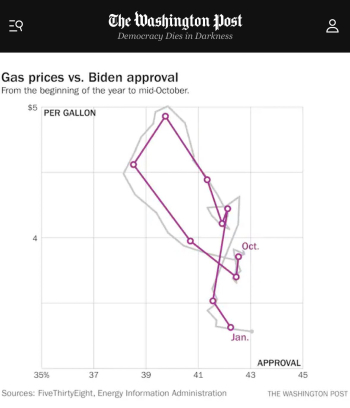 Why is this chart difficult to grasp? 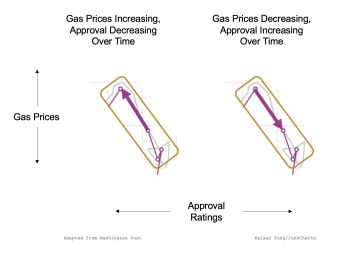 The labels on the red line are not sufficient. It's possible that time runs in the opposite direction on the gray line! We only exclude that possibility if we know that the red line is a smoothed version of the gray line.

This type of chart benefits from having a compass. Here's one: 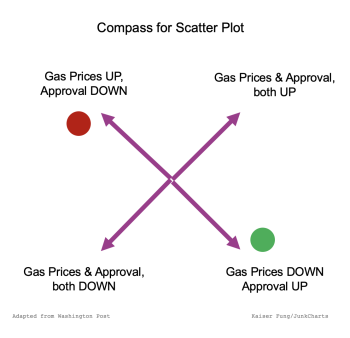 It's useful for readers to know that the southeast direction is "good" (higher approval ratings, lower gas prices) while the northwest direction is "bad". Going back to the original chart, one can see that the metrics went in the "bad" direction at the start of the year and has reverted to a "good" direction since.

What does this chart really say? The author remarked that "correlation is not causation". "Just because Biden’s approval rose as prices dropped doesn’t mean prices caused the drop."

Here's an alternative: People have general sentiments. When they feel good, they respond more positively to polls, as in they rate everything more positively. The approval ratings are at least partially driven by this general sentiment. The same author apparently has another article saying that the right-track-wrong-track sentiment also moved in tandem with gas prices.

One issue with this type of scatter plot is that it always cues readers to make an incorrect assumption: that the outcome variables (approval rating) is solely - or predominantly - driven by the one factor being visualized (gas prices). This visual choice completely biases the reader's perception.