Junk Charts
Welcome Twitter About Book Blog RSS
Dataviz is good at comparisons if we make the right comparisons
Four numbers, not as easy as it seems

I took a peek at some of the work submitted by Ray Vella's students in his NYU dataviz class recently.

The following chart by Hosanah Bryan caught my eye: 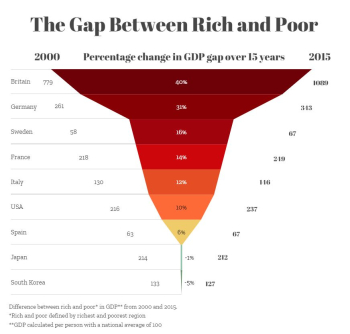 The data concern the GDP gap between rich and poor regions in various countries. In some countries, especially in the U.K., the gap is gigantic. In other countries, like Spain and Sweden, the gap is much smaller.

The above chart uses a funnel metaphor to organize the data, although the funnel does not add more meaning (not that it has to). Between that, the color scheme and the placement of text, it's visually clean and pleasant to look at.

The data being plotted are messy. They are not actual currency values of GDP. Each number is an index, and represents the relative level of the GDP gap in a given year and country. The gap being shown by the colored bars are differences in these indices 15 years apart. (The students were given this dataset to work with.)

So the chart is very hard to understand if one focuses on the underlying data. Nevertheless, the same visual form can hold other datasets which are less complicated.

One can nitpick about the slight misrepresentation of the values due to the slanted edges on both sides of the bars. This is yet another instance of the tradeoff between beauty and precision.

The next chart by Liz Delessert engages my mind for a different reason. 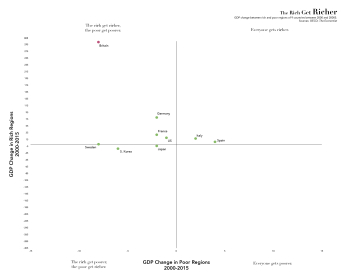 The scatter plot sets up four quadrants. The top right is "everyone gets richer". The top left, where most of the dots lie, is where "the rich get richer, the poor get poorer".  This chart shows a thoughtfulness about organizing the data, and the story-telling.

The grid setup cues readers toward a particular way of looking at the data.

But power comes with responsibility. Such scatter plots are particularly susceptible to the choice of data, in this case, countries. It is tempting to conclude that there are no countries in which everyone gets poorer. But that statement more likely tells us more about which countries were chosen than the real story.

I like to see the chart applied to other data transformations that are easier. For example, we can start with the % change in GDP computed separately for rich and for poor. Then we can form a ratio of these two percent changes.

The first example is a perfect case for something we are trying to study more systematically. When I saw the graph for the first time I immediately thought that the width of the funnel represented the gap between low and high income. In fact, this is not what it represents. The width is about the gap between two years.

For a while now, I have been thinking we need a theory of mental models for visualization. It is surprising to me how little we know and teach about reasoning about what a given representation suggests to the reader. For ages, we have been fixated with accuracy, when accuracy explains very little about the effectiveness of a chart.

Our theory is that charts have affordances and that studying these affordances is crucial to advancing the science and practice of data visualization. I'd be curious to hear what you think about this Kaiser.

P.s. Your work here is always so inspiring!

EB: Love your comment. I like how you are thinking about this. The way I have been thinking about it is that the graphical presentation (designer choices) actually frames the reader's perception - and adds biases to it sometimes. In fact, the second example also fits this story. When the designer sets the chart up into a 2x2 grid, the reader is naturally cued to think of the world in terms of four groups of countries, divided along those two selected dimensions. It takes conscious effort to escape from the framing. Related reading: https://junkcharts.typepad.com/junk_charts/2019/10/the-rule-governing-which-variable-to-put-on-which-axis-served-a-la-mode.html ... I call this "xyopia fallacy", which is one aspect of what I think you're talking about.