Variance is a friend of dataviz

Seven years ago, I wrote a post about "invariance" in data visualization, which is something we should avoid (link). Yesterday, Business Insider published the following chart in an article about rising gas prices (link): 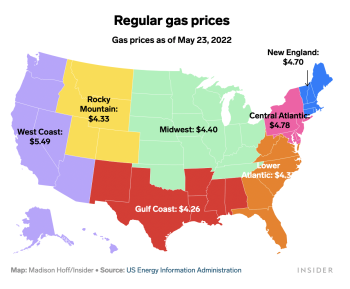 The map shows the average prices at the pump in seven regions of the United States.

This chart is succeeded by the following map: 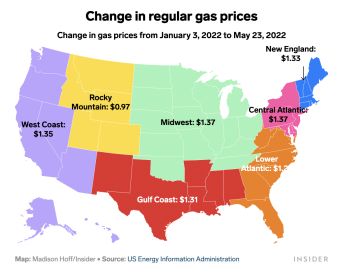 This second map shows the change in average gas prices in the same seven regions.

This design is invariant to the data! While the data change, the visualization looks identical. That's because the data are not encoded to any visual element - they are just printed as labels.

What does Elon Musk do every day?

Here is an overview of every tweet he sent since he started using Twitter more than a decade ago. 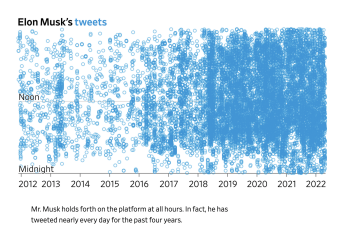 Apparently, he sent at least one tweet almost every day for the last four years. In addition, his tweets appear at all hours of the day. (Presumably, he is not the only one tweeting from his account.)

He doesn't just spend time writing tweets; he also reads other people's tweets. WSJ finds that up to 80% of his tweets include mentions of other users. 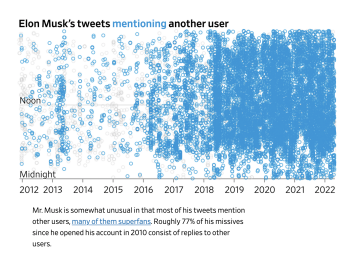 One problem with "big data" analytics is that they often don't answer interesting questions. Twitter is already one of the companies that put more of their data out there, but still, analysts are missing some of the most important variables.

We know that Musk has 93 million followers. We already know from recent news that a large proportion of such users may be spam/fake. It is frequently assumed in twitter analysis that any tweet he makes reaches 93 million accounts. That's actually far from correct. Twitter uses algorithms to decide what posts show up in each user's feed so we have no idea how many of the 93 million accounts are in fact exposed to any of Musk's tweets.

Further, not every user reads everything on their Twitter feed. I don't even check it every day. Because Twitter operates as a 'firehose" with ever-changing content as users send out short messages at all hours, what one sees depends on when one reads. If Musk tweets in the morning, the users who log on in the afternoon won't see it.

Let's say an analyst wants to learn how impactful Musk's tweets are. That's pretty difficult when one can't figure out which of the 93 million followers were shown these tweets, and who read them. The typical data used to measure response are retweets and likes. Those are convenient metrics because they are available. They are very limited in what they measure. There are lots of users who don't like or retweet at all.

The available data do make for some fun charts. This one gave me a big smile: 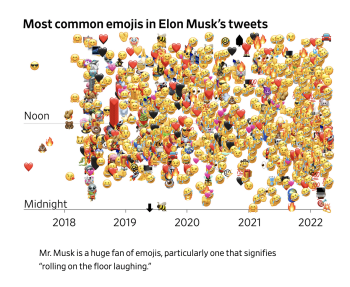 Between writing tweets, reading tweets, and ROTFL, every hour of almost every day, Musk finds time to run his several companies. That's impressive.

Light entertainment: politics down under 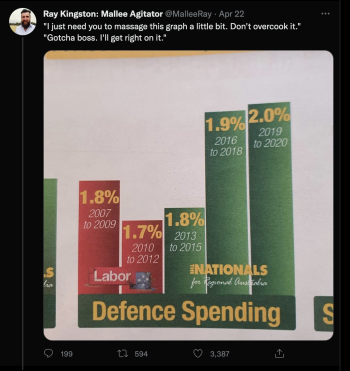