The what of visualization, beyond the how

A long-time reader sent me the following chart from a Nature article, pointing out that it is rather worthless. 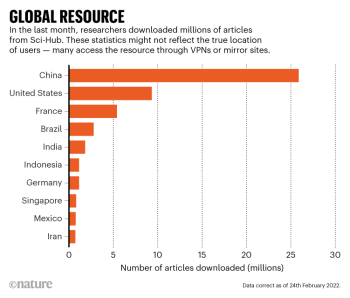 The simple bar chart plots the number of downloads, organized by country, from the website called Sci-Hub, which I've just learned is where one can download scientific articles for free - working around the exorbitant paywalls of scientific journals.

The bar chart is a good example of a Type D chart (Trifecta Checkup). There is nothing wrong with the purpose or visual design of the chart. Nevertheless, the chart paints a misleading picture. The Nature article addresses several shortcomings of the data.

The first - and perhaps most significant - problem is that many Sci-Hub users are expected to access the site via VPN servers that hide their true countries of origin. If the proportion of VPN users is high, the entire dataset is called into doubt. The data would contain both false positives (in countries with VPN servers) and false negatives (in countries with high numbers of VPN users).

The second problem is seasonality. The dataset covered only one month. Many users are expected to be academics, and in the southern hemisphere, schools are on summer vacation in January and February. Thus, the data from those regions may convey the wrong picture.

Another problem, according to the Nature article, is that Sci-Hub has many competitors. "The figures include only downloads from original Sci-Hub websites, not any replica or ‘mirror’ site, which can have high traffic in places where the original domain is banned."

Even if VPN and seasonality problems are resolved, the total number of downloads should be adjusted for population. The most appropriate adjustment factor is the population of scientists, but that statistic may be difficult to obtain. A useful proxy might be the number of STEM degrees by country - obtained from a UNESCO survey (link).

A metric of the type "number of Sci-Hub downloads per STEM degree" sounds odd and useless. I'd argue it's better than the unadjusted total number of Sci-Hub downloads. Just don't focus on the absolute values but the relative comparisons between countries. Even better, we can convert the absolute values into an index to focus attention on comparisons.