Funnel is just for fun

This is part 2 of a review of a recent video released by NASA. Part 1 is here.

The NASA video that starts with the spiral chart showing changes in average global temperature takes a long time (about 1 minute) to run through 14 decades of data, and for those who are patient, the chart then undergoes a dramatic transformation.

With a sleight of hand, the chart went from a set of circles to a funnel. Here is a look: 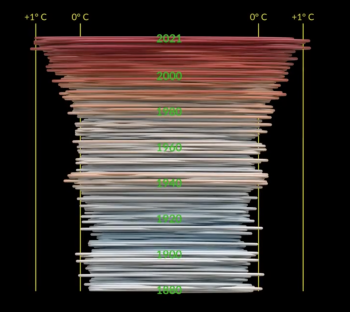 What happens is the reintroduction of a time dimension. Imagine pushing the center of the spiral down into the screen to create a third dimension.

Our question as always is - what does this chart tell readers?

The chart seems to say that the variability of temperature has increased over time (based on the width of the funnel). The red/blue color says the temperature is getting hotter especially in the last 20-40 years.

When the reader looks beneath the surface, the chart starts to lose sense. 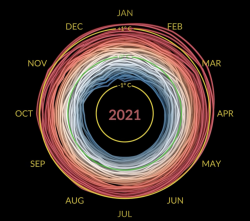 In the particular rendering of this video, the width of the funnel is the diameter linking the April and October values.

Remember the polar gridlines behind the spiral: 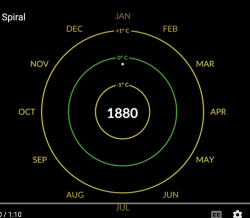 The entire section between -1 and + 1 is, in fact, meaningless. In the following chart, I removed the core of the funnel, adding back the -1 degree line. Doing so exposes an incompatibility between the spiral and funnel views. The middle of the polar grid is negative infinity, a black hole.

For a moment, the two sides of the funnel look like they are mirror images. That's not correct, either. Each width of the funnel represents a year, and the extreme values represent April and October values. The line between those two values does not signify anything real.

Let's take a pair of values to see what I mean. 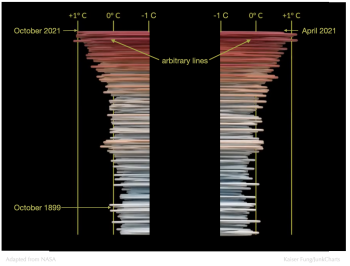 The funnel chart can be interpreted, in an obtuse way, as a pair of dot plots. As shown below, if we take dot plots for Aprils and Octobers of every year, turn the chart around, and then connect the corresponding dots, we arrive at the funnel chart. 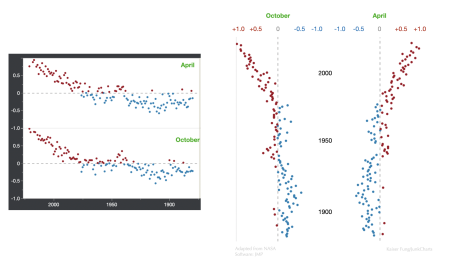 This NASA effort illustrates a central problem in visual communications: attention (what Andrew Gelman calls "grabbiness") and information integrity. On the one hand, what's the point of an accurate chart when no one is paying attention? On the other hand, what's the point of a grabby chart when anyone who pays attention gets the wrong information? It's not easy to find that happy medium.