Ringing in the data

There is a lot of great stuff at Visual Capitalist.

This circular design isn't one of their best. 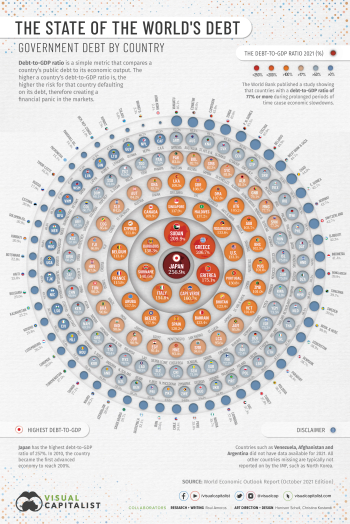 A self-sufficiency test helps diagnose the problem. Notice that every data point is printed on the diagram. If the data labels were removed, there isn't much one can learn from the chart other than the ranking of countries from most indebted to least. It would be impossible to know the difference in debt levels between any pair of countries.

The concentric rings embed a visual hierarchy: Japan is singled out, then the next tier of countries include Sudan, Greece, Eritrea, Cape Verde, Italy, Suriname, and Barbados; and so on.

What is the clustering algorithm? What determines which countries fall into the same group?

It's implicitly determined by how many countries can fit inside the next ring. The designer carefully computed the number of rings, the widths of the rings, the density of the circles, etc. in such a way that there is no unsightly white space on the outer ring. Score a 10/10 for effort!

So the clustering of countries is not data-driven but constrained by the chart form. This limitation is similar to that found on maps used to illustrate spatial data.