A twitter reader submitted the following chart from Autoevolution (link):

This is not a successful chart for the simple reason that readers want to look away from it. It's too busy. There is so much going on that one doesn't know where to look.

The underlying dataset is quite common in the marketing world. Through surveys, people are asked to rate some product along a number of dimensions (here, seven). Each dimension has a weight, and combined, the weighted sum becomes a composite ranking (shown here in gray).

Nothing in the chart stands out as particularly offensive even though the overall effect is repelling. Adding the overall rating on top of each column is not the best idea as it distorts the perception of the column heights. But with all these ingredients, the food comes out bland.

The key is editing. Find the stories you want to tell, and then deconstruct the chart to showcase them.

I start with a simple way to show the composite ranking, without any fuss: 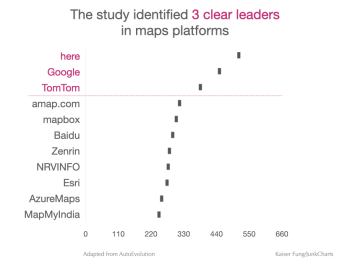 [Since these are mockups, I have copied all of the data, just the top 11 items.]

Then, I want to know if individual products have particular strengths or weaknesses along specific dimensions. In a ranking like this, one should expect that some component ratings correlate highly with the overall rating while other components deviate from the overall average.

An example of correlated ratings is the Customers dimension. 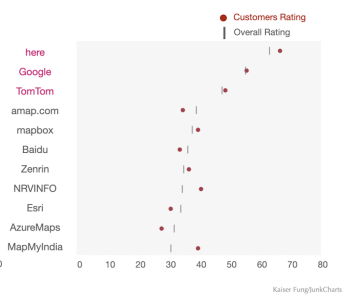 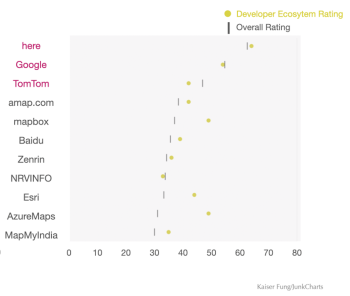 Esri, AzureMaps and Mapbox performed much better on this dimension than on the average dimension.

The following construction puts everything together in one package: 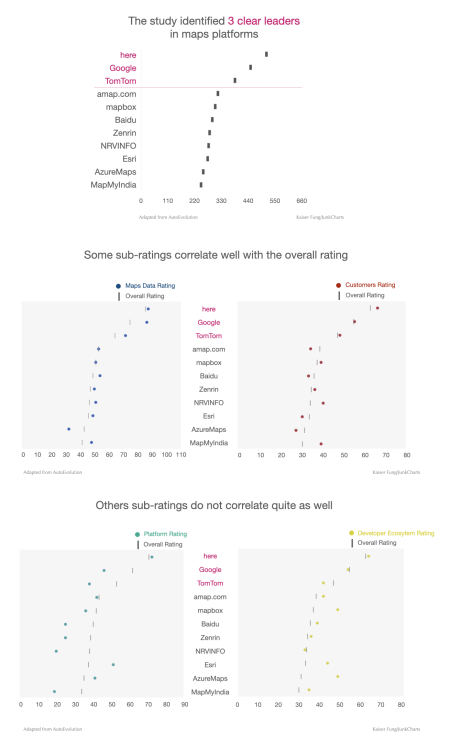