Junk Charts
Welcome Twitter About Book Blog RSS
Visual design is hard, brought to you by NYC subway
Best chart I have seen this year

Think twice before you spiral

After Nathan at FlowingData sang praises of the following chart, a debate ensued on Twitter as others dislike it. 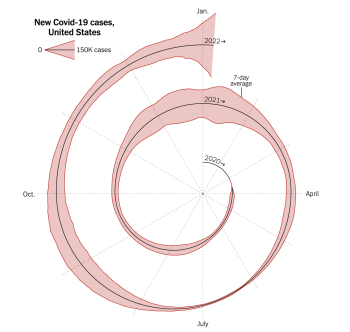 The chart was printed in an opinion column in the New York Times (link).

I have found few uses for spiral charts, and this example has not changed my mind. 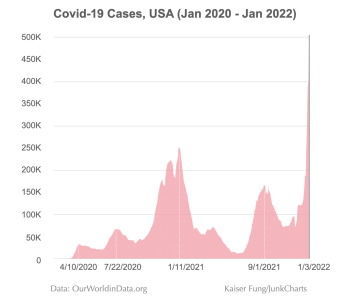 The area chart takes no effort to understand. We can see when the peaks occurred. We notice that the current surge is already double the last peak seen a year ago.

It's instructive to trace how one gets from the simple area chart to the spiral chart. 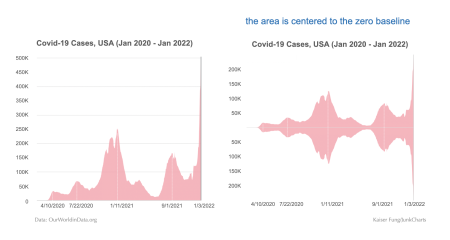 Step 1 is to center the area on the zero baseline, instead of having the zero baseline as the baseline. While this technique frequently makes for a more pleasant visual (because of our preference for symmetry), it actually makes it harder to see the trend over time. Effectively, any change is split in half, which is why the envelope of the area is less sharp. 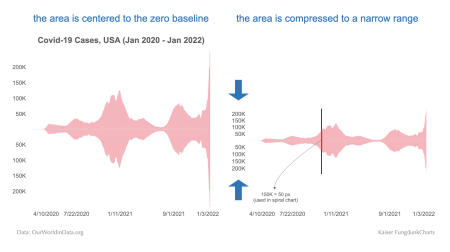 In Step 2, I massively compress the vertical scale. That's because when you plot a spiral, you are forced to fit each cycle of data into a much shorter range. Such compression causes the year on year doubling of cases to appear less dramatic. (Actually, the aspect ratio is devastated because while the vertical scale is hugely compressed, the horizontal scale is dramatically stretched out due to the curled up design) 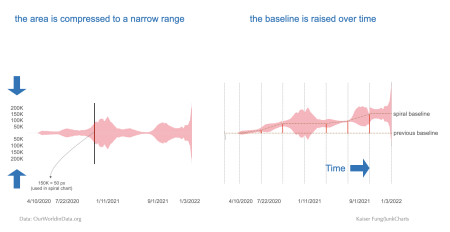 Step 3 may elude your attention. If you simply curl up the compressed, centered area chart, you don't get the spiral chart. The key is to ask about the radius of the spiral. As best I can tell, the radius has no meaning; it is gradually increased so that each year of data has its own "orbit". What would the change in radius translate to on our non-circular chart? It should mean that the center of the area is gradually lifted away from the zero line. On the right chart, I mimic this effect (I only measured the change in radius every 3 months so the change is more angular than displayed in the spiral chart.) The problem I have with this Step is that it serves no purpose, while it complicates cognition,

In Step 4, just curl up the object into a ball based on aligning months of the year. 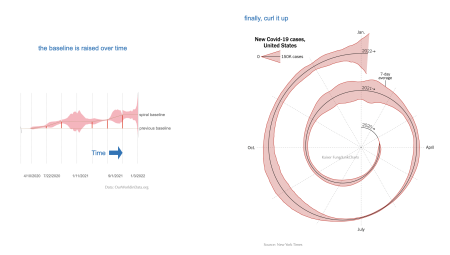 This is the point when I realized I missed a Step 2B. I carefully aligned the scales of both charts so that the 150K cases shown in the legend on the right have the same vertical representation as on the left. This exposes a severe horizontal rescaling. The length of the horizontal axis on the left chart is many times smaller than the circumference of the spiral! That's why earlier, I said one of the biggest feature of this spiral chart is that it imposes a dubious aspect ratio, that is extremely wide and extremely short.

As usual, think twice before you spiral.