Getting to first before going to second

Happy holidays to all my readers! A special shutout to those who've been around for over 15 years.

The following enhanced data table appeared in Significance magazine (August 2021) under an article titled "Winning an election, not a popularity contest" (link, paywalled) 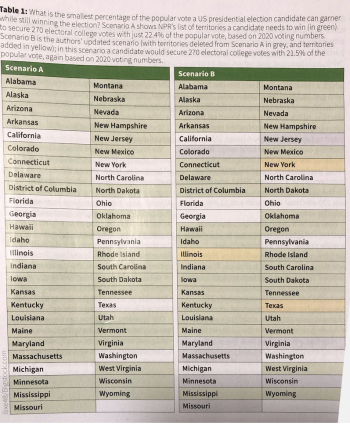 It's surprising hard to read and there are many reasons contributing to this.

First is the antiquated style guide of academic journals, in which they turn legends into text, and insert the text into a caption. This is one of the worst journalistic practices that continue to be followed.

To fix this problem, start with the Q corner of the Trifecta Checkup.

The designer wants to convey an interlocking pair of insights: the winning configuration of states for each of the two scenarios; and the difference between those two configurations.

The following revision addresses this problem: 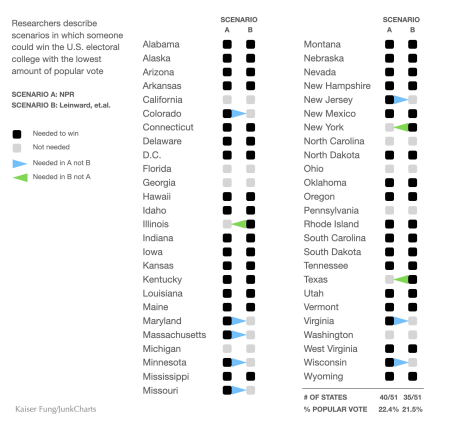 I don't like the Alabama-first sorting. If the story is about the way low-population states get an electoral college boost, maybe they could have sorted by state population, or number of Congressional districts per state? Or just grouped into four categories:

Obviously my hope is that population-based sortition will visually expose some such grouping naturally anyway.

I also think the scenarios should be directly named "NPR scenario" and "Leinwand et al. scenario," in the column headings, instead of enciphered to "A" and "B" then given a decoding table off to the side.

Derek: Yes about NJ. I found I was missing the gray square on the final check, and then I forgot about the arrow. Will fix!

Agree about naming the scenarios directly.

The problem of using 4 disjoint categories is that it obscures the first question again.

If they are using a table, then in this case, I choose Alabama first. It's just easier to find your state in such an arrangement.

However, I suspect someone will find a non-tabular way of visualizing this dataset, which makes that issue moot.