The New York Times put out a master class in visualizing space and time data recently, in a visualization of five waves of Covid-19 that have torched the U.S. thus far (link). 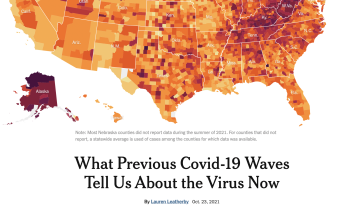 The project displays one dataset using three designs, which provides an opportunity to compare and contrast them.

The first design - above the headline - is an animated choropleth map. This is a straightforward presentation of space and time data. The level of cases in each county is indicated by color, dividing the country into 12 levels (plus unknown). Time is run forward. The time legend plays double duty as a line chart that shows the change in the weekly rate of reported cases over the course of the pandemic. A small piece of interactivity binds the legend with the map. 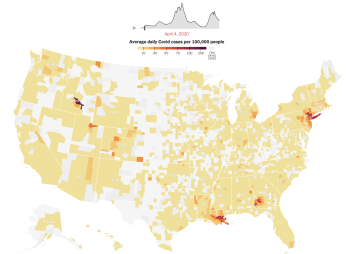 (To see a screen recording of the animation, click on the image above.)

The second design comprises six panels, snapshots that capture crucial "turning points" during the Covid-19 pandemic. The color of each county now encodes an average case rate (I hope they didn't just average the daily rates). 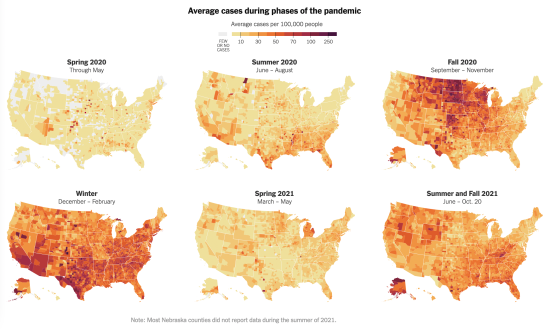 The small-multiples setup is particularly effective at facilitating comparisons: across time, and across space. It presents a story in pictures.

They may have left off 2020 following "Winter" because December to February spans both years but "Winter 2020" may do more benefit than harm here.

The third design is a series of short films, which stands mid-way between the single animated map and the six snapshots. Each movie covers a separate window of time.

This design does a better job telling the story within each time window while it obstructs comparisons across time windows.

The informative legend is back. This time, it's showing the static time window for each map.

The three designs come from the same dataset. I think of them as one long movie, six snapshots, and five short films.

The one long movie is a like a data dump. It shows every number in the dataset, which is the weekly case rate for each county for a given week. All the data are streamed into a single map. It's a show piece.

As an instrument to help readers understand the patterns in the dataset, the movie falls short. Too much is going on, making it hard to focus and pick out key trends. When your eyes are everywhere, they are nowhere.

The six snapshots represent the other extreme. The graph does not move, as the time axis is reduced to six discrete time points. But this display describes the change points, and tells a story. The long movie, by contrast, invites readers to find a story.

Without motion, the small-multiples format allows us to pick out specific counties or regions and compare the case rates across time. This task is close to impossible in the long movie, as it requires freezing the movie, and jumping back and forth.

The five short films may be the best of both worlds. It retains the motion. If the time windows are chosen wisely, each short film contains a few simple patterns that can easily be discerned. For example, the third film shows how the winter wave emerged from the midwest and then walloped the whole country, spreading southward and toward the coasts.

If there is double or triple the time allocated to this project, I'd want to explore spatial clustering. I'd like to dampen the spatial noise (neighboring counties that have slightly different experiences). There is also temporal noise (fluctuations from week to week for the same county) - which can be smoothed away. I think with these statistical techniques, the "wave" feature of the pandemic may be more visible.