As I'm preparing a blog about another real-world study of Covid-19 vaccines, I came across the following chart (the chart title is mine). 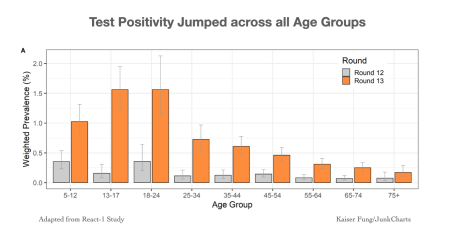 As background, this is the trend in Covid-19 cases in the U.K. in the last couple of months, courtesy of OurWorldinData.org. 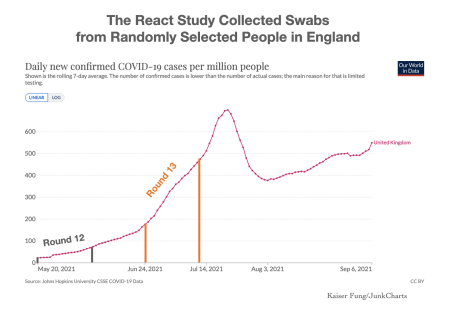 The React-1 Study sends swab kits to randomly selected people in England in order to assess the prevalence of Covid-19. Every month, there is a new round of returned swabs that are tested for Covid-19. This measurement method captures asymptomatic cases although it probably missed severe and hospitalized cases. Despite having some shortcomings, this is a far better way to measure cases than the hotch-potch assembling of variable-quality data submitted by different jurisdictions that has become the dominant source of our data.

Rounds 12 and 13 captured an inflection point in the pandemic in England. The period marked the beginning of the end of the belief that widespread vaccination will end the pandemic.

The chart I excerpted up top broke the data down by age groups. The column heights represent the estimated prevalence of Covid-19 during each round - also, described precisely in the paper as "swab positivity." Based on the study's design, one may generalize the prevalence to the population at large. About 1.5% of those aged 13-24 in England are estimated to have Covid-19 around the time of Round 13 (roughly early July).

The researchers came to the following conclusion:

We show that the third wave of infections in England was being driven primarily by the Delta variant in younger, unvaccinated people. This focus of infection offers considerable scope for interventions to reduce transmission among younger people, with knock-on benefits across the entire population... In our data, the highest prevalence of infection was among 12 to 24 year olds, raising the prospect that vaccinating more of this group by extending the UK programme to those aged 12 to 17 years could substantially reduce transmission potential in the autumn when levels of social mixing increase

Raise your hand if the graphics software you prefer dictates at least one default behavior you can't stand. I'm sure most hands are up in the air. No matter how much you love the software, there is always something the developer likes that you don't.

The first thing I did with today's chart is to get rid of all such default details. 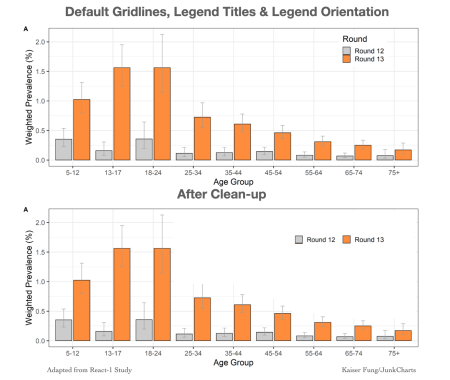 For me, the bottom chart is cleaner and more inviting.

The researchers wanted readers to think in terms of Round 3 numbers as multiples of Round 2 numbers. In the text, they use statements such as:

It's not easy to perceive a nine-fold jump from the paired column chart, even though this chart form is better than several others. I added some subtle divisions inside each orange column in order to facilitate this task: 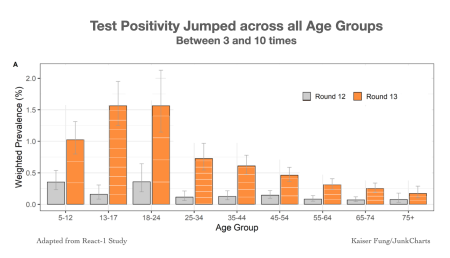 I have recommended this before. I'm co-opting pictograms in constructing the column chart.

An alternative is to plot everything on an index scale although one would have to drop the prevalence numbers.

The chart requires an additional piece of context to interpret properly. I added each age group's share of the population below the chart - just to illustrate this point, not to recommend it as a best practice. 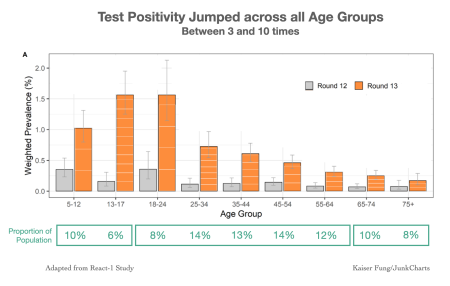 The researchers concluded that their data supported vaccinating 13-17 year olds because that group experienced the highest multiplier from Round 12 to Round 13. Notice that the 13-17 year old age group represents only 6 percent of England's population, and is the least populous age group shown on the chart.

The neighboring 18-24 age group experienced a 4.5 times jump in prevalence in Round 13 so this age group is doing much better than 13-17 year olds, right? Not really.

While the same infection rate was found in both age groups during this period, the slightly older age group accounted for 50% more cases -- and that's due to the larger share of population.

A similar calculation shows that while the infection rate of people under 24 is about 3 times higher than that of those 25 and over, both age groups suffered over 175,000 infections during the Round 3 time period (the difference between groups was < 4,000).  So I don't agree that focusing on 13-17 year olds gives England the biggest bang for the buck: while they are the most likely to get infected, their cases account for only 14% of all infections. Almost half of the infections are in people 25 and over.