A little stitch here, a great graphic is knitted 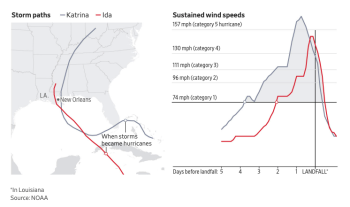 This graphic illustrates the power of visual communications. Readers can learn a lot from it.

The paths of the storms can be compared. The geographical locations of the landfalls are shown. The strengthening of wind speeds as the hurricanes moved toward Louisiana is also displayed. Ida is clearly a lesser storm than Katrina: its wind speed never reached Category 5, and is generally lower at comparable time points.

The greatest feature of the WSJ graphic is how the designer stitches the two plots into one graphic. The anchors are two time points: when each storm attained enough wind speed to be classified as a hurricane (indicated by open dots), and when each storm made landfall in Louisiana. It is this little-noticed feature that makes it so easy to place each plot in context of the other.

Great graphic! Though my takeaway is that when they both actually made landfall (which is presumably the point at which they start to inflict damage), they are actually similarly intense.

Katrina seems to decelerate somewhat as it approached Louisiana, whereas Ida hits its peak at landfall - unsure if this makes a difference.

I would have also liked to see some depiction of the “volume” of the hurricane, or how much water it carried.