What metaphors give, they take away

Aleks pointed me to the following graphic making the rounds on Twitter: 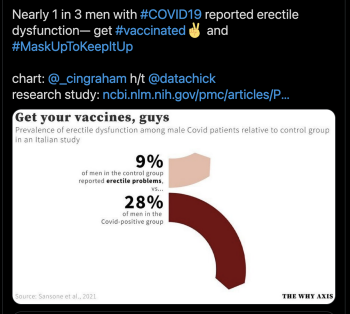 It's being passed around as an example of great dataviz.

The entire attraction rests on a risque metaphor. The designer is illustrating a claim that Covid-19 causes erectile dysfunction in men.

That's a well-formed question so in using the Trifecta Checkup, that's a pass on the Q corner.

What about the visual metaphor? I advise people to think twice before using metaphors because these devices can give as they can take. This example is no exception. Some readers may pay attention to the orientation but other readers may focus on the size.

I pulled out the tape measure. Here's what I found. 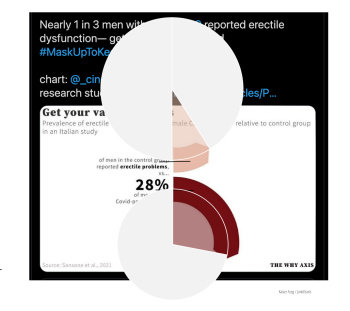 The angle is accurate on the first chart but the diameter has been exaggerated relative to the other. The angle is slightly magnified in the bottom chart which has a smaller circumference.

Let's look at the Data to round out our analysis. They come from a study from Italy (link), utilizing survey responses. There were 25 male respondents in the survey who self-reported having had Covid-19. Seven of these submitted answers to a set of five questions that were "suggestive of erectile dysfunction". (This isn't as arbitrary as it sounds - apparently it is an internationally accepted way of conducting reseach.) Seven out of 25 is 28 percent. Because the sample size is small, the 95% confidence range is 10% to 46%.

The researchers then used the propensity scoring method to find 3 matches per each infected person. Each match is a survey respondent who did not self-report having had Covid-19. See this post about a real-world vaccine study to learn more about propensity scoring. Among the 75 non-infected men, 7 were judged to have ED. The 95% range is 3% to 16%.

The difference between the two subgroups is quite large. The paper also includes other research that investigates the mechanisms that can explain the observed correlation. Nevertheless, the two proportions depicted in the chart have wide error bars around them.

I have always had a question about analysis using this type of survey data (including my own work). How do they know that ED follows infection rather than precedes it? One of the inviolable rules of causation is that the effect follows the cause. If it's a series of surveys, the sequencing may be measurable but a single survey presents challenges.

The headline of the dataviz is "Get your vaccines". This comes from a "story time" moment in the paper. On page 1, under Discussion and conclusion, they inserted the sentence "Universal vaccination against COVID-19 and the personal protective equipment could possibly have the added benefit of preventing sexual dysfunctions." Nothing in the research actually supports this claim. The only time the word "vaccine" appears in the entire paper is on that first page.

"Story time" is the moment in a scientific paper when the researchers - after lulling readers to sleep over some interesting data - roll out statements that are not supported by the data presented before.

The graph succeeds in catching people's attention. The visual metaphor works in one sense but not in a different sense.

The color selection is also... uh... well that's certainly a choice that was made.