Simple charts are the hardest to do right

The CDC website has a variety of data graphics about many topics, one of which is U.S. vaccinations. I was looking for information about Covid-19 data broken down by age groups, and that's when I landed on these charts (link). 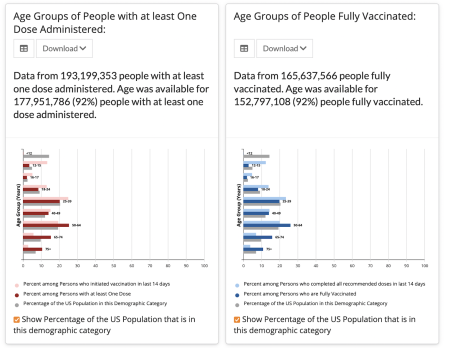 The left panel shows people with at least one dose, and the right panel shows those who are "fully vaccinated." This simple chart takes an unreasonable amount of time to comprehend.

The analyst introduces three metrics, all of which are described as "percentages". Upon reflection, they are proportions of the people in specific age ranges.

Readers are thus invited to compare these proportions. It's not clear, however, which comparisons are intended. The first item listed in the legend states "Percent among Persons who completed all recommended doses in last 14 days". For most readers, including me, this introduces an unexpected concept. The 14 days here do not refer to the (in)famous 14-day case-counting window but literally the most recent two weeks relative to when the chart was produced.

It would have been clearer if the concept of Proportions were introduced in the chart title or axis title, while the color legend explains the concept of the base population. From the lighter shade to the darker shade (of red and blue) to the gray color, the base population shifts from "Among Those Who Completed/Initiated Vaccinations Within Last 14 Days" to "Among Those Who Completed/Initiated Vaccinations Any Time" to "Among the U.S. Population (regardless of vaccination status)".

Also, a reverse order helps our comprehension. Each subsequent category is a subset of the one above. First, the whole population, then those who are fully vaccinated, and finally those who recently completed vaccinations.

The next hurdle concerns the Q corner of our Trifecta Checkup. The design leaves few hints as to what question(s) its creator intended to address. The age distribution of the U.S. population is useless unless it is compared to something.

One apparently informative comparison is the age distribution of those fully vaccinated versus the age distribution of all Americans. This is revealed by comparing the lengths of the dark blue bar and the gray bar. But is this comparison informative? It's telling me that people aged 50 to 64 account for ~25% of those who are fully vaccinated, and ~20% of all Americans. Because proportions necessarily add to 100%, this implies that other age groups have been less vaccinated. Duh! Isn't that the result of an age-based vaccination prioritization? During the first week of the vaccination campaign, one might expect close to 100% of all vaccinations to be in the highest age group while it was 0% for the other age groups.

This is a chart in search of a question. The 25% vs 20% comparison does not assist readers in making a judgement. Does this mean the vaccination campaign is working as expected, worse than expected or better than expected? The problem is the wrong baseline. The designer of this chart implies that the expected proportions should conform to the overall age distribution - but that clearly stands in the way of CDC's initial prioritization of higher-risk age groups.

In my version of the chart, I illustrate the proportion of people in each age group who have been fully vaccinated. 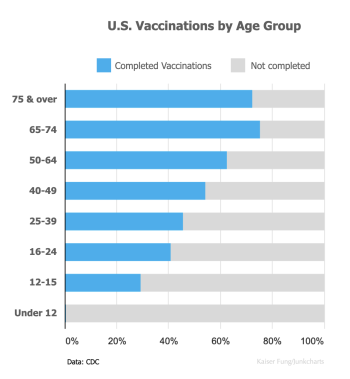 Among those fully vaccinated, some did it within the most recent two weeks: 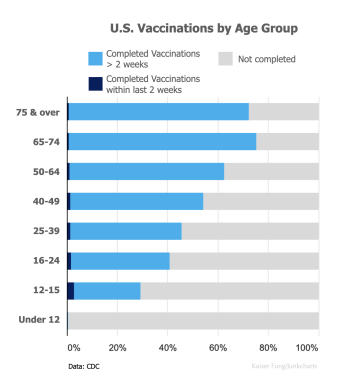 Elsewhere on the CDC site, one learns that on these charts, "fully vaccinated" means one shot of J&J or 2 shots of Pfizer or Moderna, without dealing with the 14-day window or other complications. Why do we think different definitions are used in different analyses? Story-first thinking, as I have explained here. When it comes to telling the story about vaccinations, the story is about the number of shots in arms. They want as big a number as possible, and abandon any criterion that decreases the count. When it comes to reporting on vaccine effectiveness, they want as small a number of cases as possible.