Junk Charts
Welcome Twitter About Book Blog RSS
Hanging things on your charts
What metaphors give, they take away

This dataviz from the Economist had me spending a lot of time clicking around - which means it is a success. 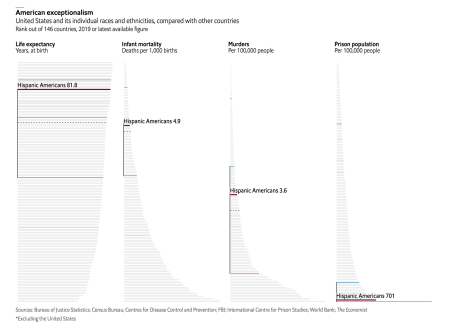 The graphic presents four measures of wellbeing in society - life expectancy, infant mortality rate, murder rate and prison population. The primary goal is to compare nations across those metrics. The focus is on comparing how certain nations (or subgroups) rank against each other, as indicated by the relative vertical position.

The Economist staff has a particular story to tell about racial division in the US. The dotted bars represent the U.S. average. The colored bars are the averages for Hispanic, white and black Americans. The wider the gap between the colored bars, the more variant is the experiences between American races.

The chart shows that the racial gap of life expectancy is the widest. For prison population, the U.S. and its racial subgroups occupy many of the lowest (i.e. least desirable) ranks, with the smallest gap in ranking.

The primary element of interactivity is hovering on a bar, which then highlights the four bars corresponding to the particular nation selected. Here is the picture for Thailand: 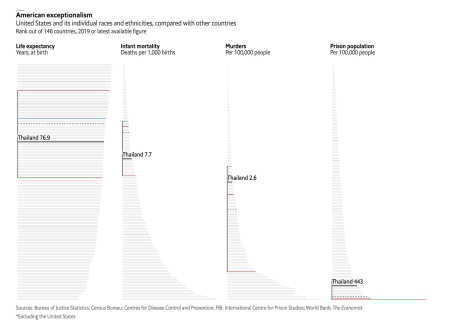 According to this view of the world, Thailand is a close cousin of the U.S. On each metric, the Thai value clings pretty near the U.S. average and sits within the range by racial groups. I'm surprised to learn that the prison population in Thailand is among the highest in the world.

Unfortunately, this chart form doesn't facilitate comparing Thailand to a country other than the U.S as one can highlight only one country at a time.

While the main focus of the chart is on relative comparison through ranking, the reader can extract absolute difference by reading the lengths of the bars.

This is a close-up of the bottom of the prison population metric:

The length of each bar displays the numeric data. The red line is an outlier in this dataset. Black Americans suffer an incarceration rate that is almost three times the national average. Even white Americans (blue line) is imprisoned at a rate higher than most countries around the world.

As noted above, the prison population metric exhibits the smallest gap between racial subgroups. This chart is a great example of why ranking data frequently hide important information. The small gap in ranking masks the extraordinary absolute difference in incareration rates between white and black America.

The difference between rank #1 and rank #2 is enormous. 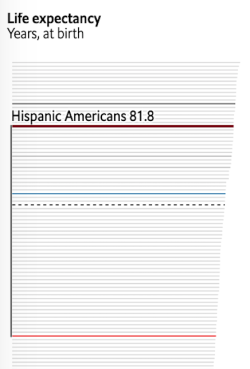 The opposite situation appears for life expectancy. The life expectancy values are bunched up especially at the top of the scale. The absolute difference between Hispanic and black America is 82 - 75 = 7 years, which looks small because the axis starts at zero. On a ranking scale, Hispanic is roughly in the top 15% while black America is just above the median. The relative difference is huge.

Whenever you transform numeric data to ranks, remember that you are artificially treating the gap between each value and the next value as a constant, even when the underlying numeric gaps show wide variance.

I've looked at similar data using PCA for countries, and if you log some of the measures it works well with 1 or 2 dimensions. It would be interesting to repeat with the 3 different populations within the USA.