Plotting the signal or the noise

Antonio alerted me to the following graphic that appeared in the Economist. This is a playful (?) attempt to draw attention to racism in the game of football (soccer).

The analyst proposed that non-white players have played better in stadiums without fans due to Covid19 in 2020 because they have not been distracted by racist abuse from fans, using Italy's Serie A as the case study. 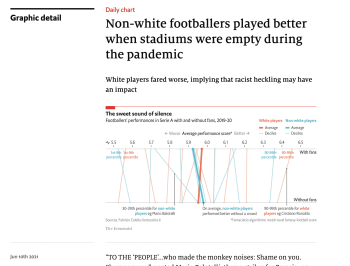 The chart struggles to bring out this finding. There are many lines that criss-cross. The conclusion is primarily based on the two thick lines - which show the average performance with and without fans of white and non-white players. The blue line (non-white) inched to the right (better performance) while the red line (white) shifted slightly to the left.

If the reader wants to understand the chart fully, there's a lot to take in. All (presumably) players are ranked by the performance score from lowest to highest into ten equally sized tiers (known as "deciles"). They are sorted by the 2019 performance when fans were in the stadiums. Each tier is represented by the average performance score of its members. These are the values shown on the top axis labeled "with fans".

Then, with the tiers fixed, the players are rated in 2020 when stadiums were empty. For each tier, an average 2020 performance score is computed, and compared to the 2019 performance score.

The following chart reveals the structure of the data: 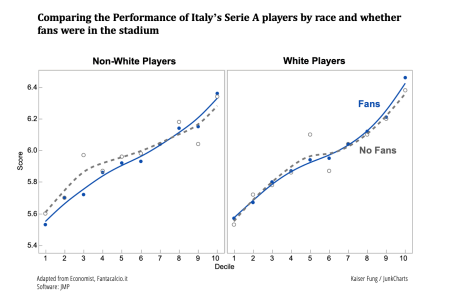 The players are lined up from left to right, from the worst performers to the best. Each decile is one tenth of the players, and is represented by the average score within the tier. The vertical axis is the actual score while the horizontal axis is a relative ranking - so we expect a positive correlation.

What do we learn from the graphic?

It's very hard to know if the blue and gray lines are different by chance or by whether fans were in the stadium. The maximum gap between the lines is not quite 0.2 on the raw score scale, which is roughly a one-decile shift. It'd be interesting to know the variability of the score of a given player across say 5 seasons prior to 2019. I suspect it could be more than 0.2. In any case, the tiny shifts in the averages (around 0.05) can't be distinguished from noise.

This type of analysis is tough to do. Like other observational studies, there are multiple problems of biases and confounding. Fan attendance was not the only thing that changed between 2019 and 2020. The score used to rank players is a "Fantacalcio algorithmic match-level fantasy-football score." It's odd that real-life players should be judged by their fantasy scores rather than their on-the-field performance.

The causal model appears to assume that every non-white player gets racially abused. At least, the analyst didn't look at the curves above and conclude, post-hoc, that players in the third decile are most affected by racial abuse - which is exactly what has happened with the observational studies I have featured on the book blog recently.

Being a Serie A fan, I happen to know non-white players are a small minority so the error bars are wider, which is another issue to think about. I wonder if this factor by itself explains the shifts in those curves. The curve for white players has a much higher sample size thus season-to-season fluctuations are much smaller (regardless of fans or no fans).

These are valid concerns. However, the article is based on a scientific paper (forthcoming), on which it is shown that the difference in grades is statistically significant and it stays that way also after controlling for several teams and player characteristics, including nationality.

Giovanni: Happy to link to the paper when it's released. Do you happen to know the number of non-white players vs white players in the data?