Distorting perception versus distorting the data

This chart appears in the latest ("last print issue") of Schwab's On Investing magazine:

It's not the usual complaint of distorting the data. When the base of the triangle is fixed, and only the height is varied, then the area is proportional to the height and thus nothing is distorted.

Nevertheless, my ability to compare those triangles pales in comparison to the following columns. 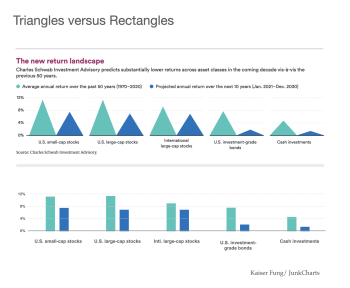 This phenomenon is not limited to triangles. One can take columns and start varying the width, and achieve a similar effect: 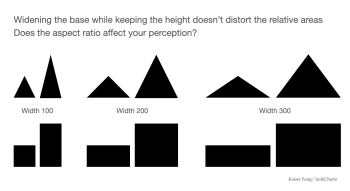 It's really the aspect ratio - the relationship between the height and the width that's the issue.

Interestingly, with an appropriately narrow base, even the triangular shape can be saved.

In a sense, we can think of the width of these shapes as noise, a distraction - because the width is constant, and not encoding any data.

It's like varying colors for no reason at all. It introduces a pointless dimension.

It may be prettier but the colors also interfere with our perception of the changing heights.