Art sent me the following Economist chart, noting how hard it is to understand. I took a look, and agreed. It's an example of a visual representation that takes more time to comprehend than the underlying data. 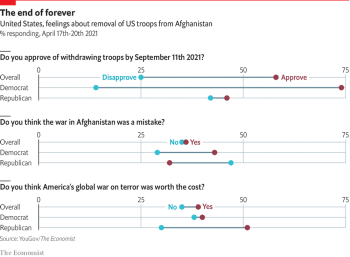 The chart presents responses to 3 questions on a survey. For each question, the choices are Approve, Disapprove, and "Neither" (just picking a word since I haven't seen the actual survey question). The overall approval/disapproval rates are presented, and then broken into two subgroups (Democrats and Republicans).

The first hurdle is reading the scale. Because the section from 75% to 100% has been removed, we are left with labels 0, 25, 50, 75, which do not say percentages unless we've consumed the title and subtitle. The Economist style guide places the units of data in the subtitle instead of on
the axis itself.

Our attention is drawn to the thick lines, which represent the differences between approval and disapproval rates. These differences are signed: it matters whether the proportion approving is higher or lower than the proportion disapproving. This means the data are encoded in the order of the dots plus the length of the line segment between them.

The two bottom rows of the Afghanistan question demonstrates this mental challenge. Our brains have to process the following visual cues:

1) the two lines are about the same lengths

3) the colors of the dots are flipped

What do they all mean?

A chart runs in trouble when you need a paragraph to explain how to read it.

Here, I show the full axis, and add a 50% reference line 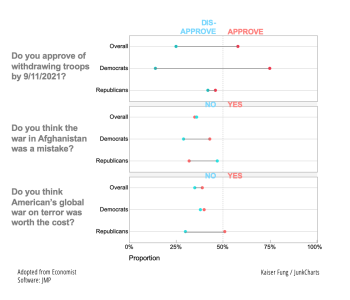 Small edits but they help visualize "half of", "three quarters of".

Next, I switch to the more conventional stacked bars. 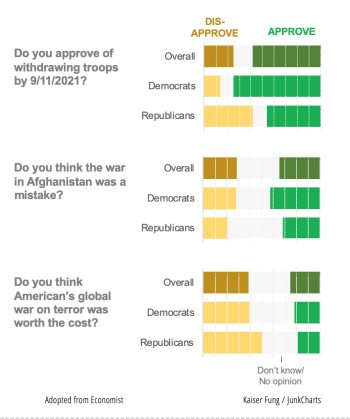 This format reveals some of the hidden data on the chart - the proportion answering neither approve/disapprove, and neither yes/no.

Read all my posts about Economist charts here

Just like the “neither” was missing, so are the “independents”. I base this on the Overall-Yes in question 3 being less than Dems and the Reps. It is either that or there are deeper concerns with the data.

WL: Good catch. I chose not to address that because we couldn't infer Independents from the given data. I even tried to fit some numbers but they don't seem to make sense to me.