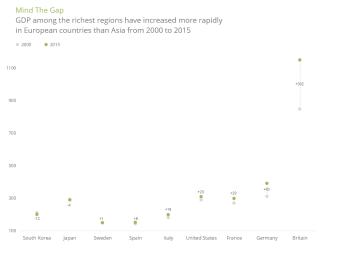 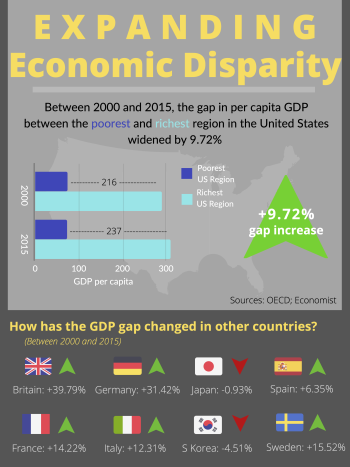 These two charts are indeed very well done. I agree with your suggestion of dropping the decimals, or, put another way, reducing the number of significant figures, which otherwise imply greater precision than perhaps is available in the data set.

One question not answered by the data presented and important for interpretation of the "gap" is the number of regions in each case. It would seem that the more regions the greater the gap between the extremes.

RK: That's the reason why this dataset is tough. Eqality between regions is not the same as equality between people. That's the lesson of my guest lecture. Of course, we get behind how to connect those two concepts.

I think your suggestion to "b) leave off the decimals" is under-stated. Extraneous decimals are worse than other extra added bits on a chart, since they're both right in the reader's face and give a sense of precision which often does not exist. It's a very common error that I emphasize on in week 1 of training for any new analyst or data scientist.

Why is there no label on the y-axis? Is it GDP in some common currency? It's not clear.
Why does the y-axis have a non-zero origin? Given how close some of the values are to zero, it seems like it should be zero.

Todd: You raised an excellent issue. Both students left off the complicated scale of the data. What is plotted is regional average GDP expressed as an index to each country's average GDP in any given year. The first student started the axis at 100 probably for that reason. The second effort uses a column chart, which has to start from 0, and she did that. One can argue that for index values, a column chart is not best choice. However, if we think abstractly, it's acceptable.