There are some data visualization that are obviously bad. But what makes them bad?

Here is an example of such an effort: 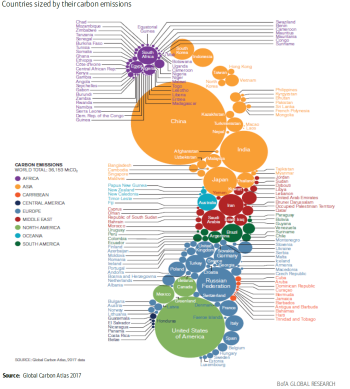 This visualization of carbon emissions is not successful. There is precious little that a reader can learn from this chart without expensing a lot of effort. It's relatively easy to identify the largest emitters of carbon but since the data are not expressed per-capita, the chart mainly informs us which countries have the largest populations.

The color of the bubbles informs readers which countries belong to which parts of the world. However, it distorts the location of countries within regions, and regions relative to regions, as the primary constraint is fitting the bubbles inside the shape of a foot.

The visualization gives a very rough estimate of the relative sizes of total emissions. The circles not being perfect circles don't help.

The small emitters stole all of the attention as they account for most of the labels - and they engender a huge web of guiding lines - an unsightly nuisance.

The diagram clings dearly to the "carbon footprint" metaphor. Does this metaphor help readers consume the emissions data? Conversely, does it slow them down?

A more conventional design uses a cartogram, a type of map in which the positioning of countries are roughly preserved while the geographical areas are coded to the data. Here's how it looks: 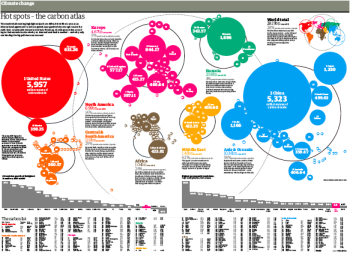 I can't seem to source this effort. If any reader can find the original source, please comment below.

This cartogram is a rearrangement of the footprint illustration. The map construct eliminates the need to include a color legend which just tells people which country is in which continent. The details of smaller countries are pushed to the bottom.

In the footprint visualization, I'd even consider getting rid of the legend completely. This means trusting that readers know South Africa is part of Africa, and China is part of Asia. 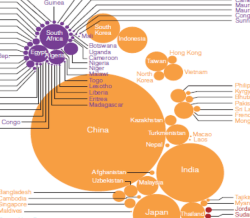 Imagine: what if this chart comes without a color legend? Do we really need it?

I'd like to try a word cloud visual for this dataset. Something that looks like this (obviously with the right data encoding): 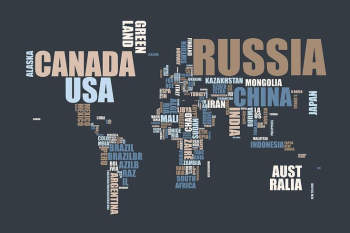 (This map is by Michael Tompsett who sells it here.)

RK: Thanks. Looks like the original source is The Guardian.

A cartogram invites comparison of the displayed data with the country surface area, which would send the wrong message.

JP: Isn't the point of the cartogram to re-scale the areas from surface area to the data? Are you saying that the prior of the surface area is so strong that it overwhelms the data? If that's the case, then you're making an argument against all cartograms.