One of my Italian readers sent me the following "horror chart". (Last I checked, it's not Halloween.)

I mean, people are selling these rainbow sunglasses.

The dataset behind the chart is the market share of steel production by country in 1992 and in 2014. The presumed story is how steel production has shifted from country to country over those 22 years.

Before anything else, readers must decipher the colors. This takes their eyes off the data and on to the color legend placed on the right column. The order of the color legend is different from that found in the nearest object, the 2014 donut. The following shows how our eyes roll while making sense of the donut chart. 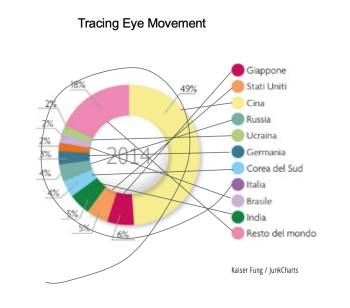 It's easier to read the 1992 donut because of the order but now, our eyes must leapfrog the 2014 donut.

This is another example of a visualization that fails the self-sufficiency test. The entire dataset is actually printed around the two circles. If we delete the data labels, it becomes clear that readers are consuming the data labels, not the visual elements of the chart. 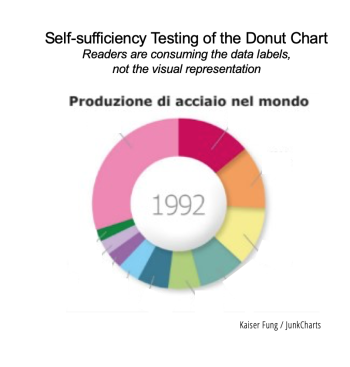 The chart is aimed at an Italian audience so they may have a patriotic interest in the data for Italia. What they find is disappointing. Italy apparently completely dropped out of steel production. It produced 3% of the world's steel in 1992 but zero in 2014.

Now I don't know if that is true because while reproducing the chart, I noticed that in the 2014 donut, there is a dark orange color that is not found in the legend. Is that Italy or a mysterious new entrant to steel production?

One alternative is a dot plot. This design accommodates arrows between the dots indicating growth versus decline. 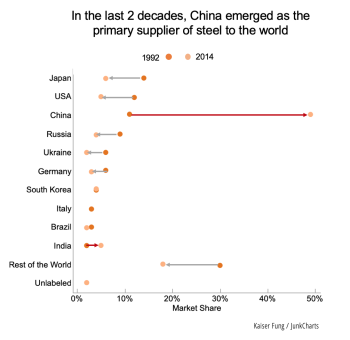 Great article, and youtr osservation are precise.
By the way "Ciambella" is te italian "Donut" :-)
Ciao!

Aidoru: Grazie! There used to be a shop in Manhattan that sold the Napoletan version called "graffa". They were so good! I missed them much.