And you thought that pie chart was bad...

Vying for some of the worst charts of the year, Adobe came up with a few gems in its Digital Trends Survey. This was a tip from Nolan H. on Twitter.

There are many charts that should be featured; I'll focus on this one. 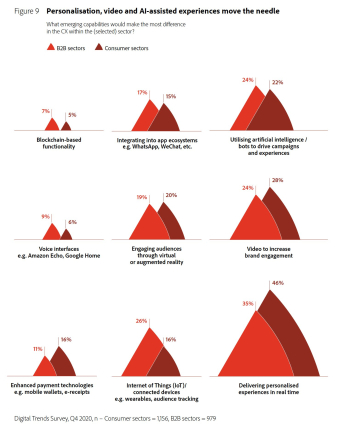 This is one of those survey questions that allow each respondent to select multiple responses so that adding up the percentages exceeds 100%. The survey asks people which of these futuristic products do they think is most important. There were two separate groups of respondents, consumers (lighter red) and businesses (darker red).

If, like me, you are a left-to-right, top-to-bottom reader, you'd have consumed this graphic in the following way:

Here is a more sensible order of these objects:

To follow this order, our eyes must do this: 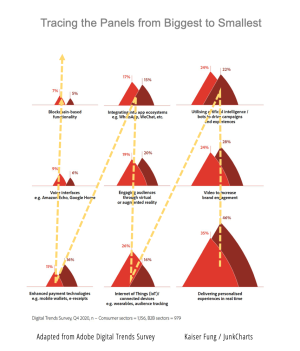 Now, let me say I like what they did with the top of the chart:

Put the legend above the chart because no one can understand it without first reading the legend. 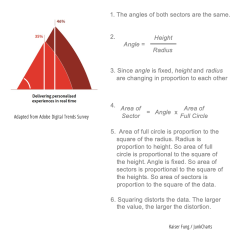 Data are embedded into part-circles (i.e. sectors)... but where do we find the data? The most obvious place to look for them is the areas of the sectors. But that's the wrong place. As I show in the explainer, the designer placed the data in the "height" - the distance from the peak point of the object to the horizontal baseline.

As a result of this choice, the areas of the sectors distort the data - they are proportional to the square of the data.

One simple way to figure out that your graphical objects have obscured the data is the self-sufficiency test. Remove all data labels from the chart, and ask if you still have something understandable. 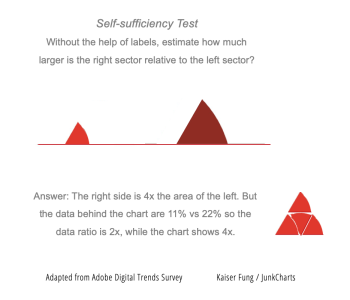 With these unusual shapes, it's not easy to judge how much larger is one object from the next. That's why the data labels were included - the readers are looking at the data values, rather than the graphical objects. That's sad, if you are the designer.

One last mystery. What decides the layering of the light vs dark red sectors? 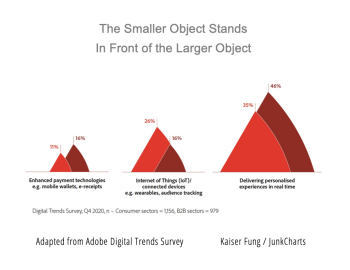 This design always places the smaller object in front of the larger object. Recall that the light red is for consumers and dark red for businesses. The comparison between these disjoint segments is not as interesting as the comparison of different ratings of technologies with each segment. So it's unfortunate that this aspect may get more attention than it deserves. It's also a consequence of the chart form. If the light red is always placed in front, then in some panels (such as the middle one shown above), the light red completely blocks the dark red.

Critiquing this chart is like commenting on the arrangement of the deck chairs on the sinking Titanic. The chart is irrevocably doomed. A bar chart is all that is needed.