Reading an infographic about our climate crisis

Let's explore an infographic by SCMP, which draws attention to the alarming temperature recorded at Verkhoyansk in Russia on June 20, 2020. The original work was on the back page of the printed newspaper, referred to in this tweet.

This view of the globe brings out the two key pieces of evidence presented in the infographic: the rise in temperature in unexpected places, and the shrinkage of the Arctic ice. 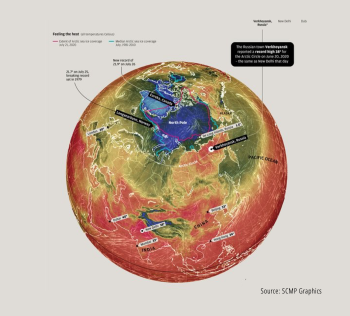 A notable design decision is to omit the color scale. On inspection, the scale is present - it was sewn into the graphic. 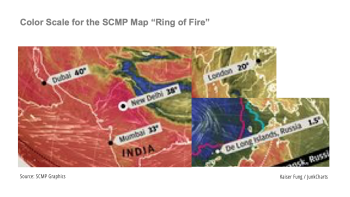 I applaud this decision as it does not take the reader's eyes away from the graphic. Some information is lost as the scale isn't presented in full details but I doubt many readers need those details.

A key takeaway is that the temperature in Verkhoyansk, which is on the edge of the Arctic Circle, was the same as in New Delhi in India on that day. We can see how the red was encroaching upon the Arctic Circle. 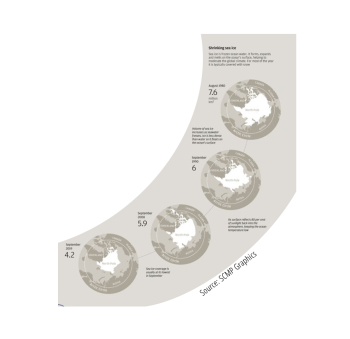 Next, the rapid shrinkage of the Arctic ice is presented in two ways. First, a series of maps.

The annotations are pared to the minimum. The presentation is simple enough such that we can visually judge that the amount of ice cover has roughly halved from 1980 to 2009.

A numerical measure of the drop is provided on the side.

Then, a line chart reinforces this message.

This chart suggests that the year 2020 may break the record for the smallest ice cover since 1980. The maps of Australia and India provide context to interpret the size of the Arctic ice cover.

I'd suggest reversing the pink and black colors so as to refer back to the blue and pink lines in the globe above.

The final chart shows the average temperature worldwide and in the Arctic, relative to a reference period (1981-2000).

If this is a stacked area chart, then we'd interpret the two data series as summable, with the sum of the data series signifying something interesting. For example, the market shares of different web browsers sum to the total size of the market.

But the chart above should not be read as a stacked area chart because the outside envelope isn't the sum of the two anomalies. The problem is revealed if we try to articulate what the color shades mean. 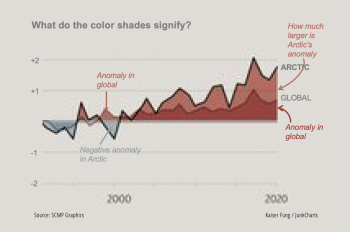 On the far right, it seems like the dark shade is paired with the lighter line and represents global positive anomalies while the lighter shade shows Arctic's anomalies in excess of global. This interpretation only works if the Arctic line always sits above the global line. This pattern is broken in the late 1990s.

One possible fix is to encode the size of the anomaly into the color of the line. The further away from zero, the darker the red/blue color.

The genius of labeling points on the map, and then throwing away the scale, is the equivalent of labeling the data points on a line graph, and then throwing away the (now redundant) axis scale. It works even if not every point on the line, or every line, is value labeled, as long as what labels are there help orient the viewer in the value landscape.