This chart appeared in a Charles Schwab magazine in Summer, 2019.

This bubble chart does not print any data labels. The bubbles take our attention but the designer realizes that the actual values of the volatility are not intuitive numbers. The same is true of any standard deviation numbers. If you're told SD of a data series is 3, it doesn't tell you much by itself.

I first transformed this chart into the equivalent column chart: Two problems surface on the axes.

For the time axis, the years are jumbled. Readers experience vertigo, as we try to figure out how to read the chart. Our expectation that time moves left to right is thwarted. This ordering also requires every single year label to be present.

For the vertical axis, I could have left out the numbers completely. They are not really meaningful. These represent the areas of the bubbles but only relative to how I measured them.

In the next version, I sorted time in the conventional manner. Following Tufte's classic advice, only the tops of the columns are plotted. 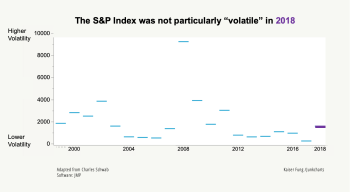 What you see is that this ordering is much easier to comprehend. Figuring out that 2018 is an average year in terms of volatility is not any harder than in the original. In fact, we can reproduce the order of the previous chart just by letting our eyes sweep top to bottom.

To make it even easier to read the vertical axis, I converted the numbers into an index, with the average volatility as 100 %  (assigned to 0% on the chart) . 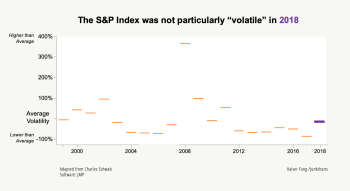 Now, you can see that 2018 is roughly at the average while 2008 is 400% above the average level. (How should we interpret this statement? That's a question I pose to my statistics students. It's not intuitive how one should interpret the statement that the standard deviation is 5 times higher.)

Definitely an improvement, though the final version has some contrast issues. If you're going to use orange for data, I'd recommend thicker indicators, going back to full bars, moving to a darker orange, or preferably a darker shade AND thicker indicator.

I handle a fair amount of accessibility as part of my work. I typically use https://contrast-ratio.com/ to check these.

Typo: I think you meant "with the average volatility as 0%".

Co: Thanks for the link. Useful site.