Election visuals 4: the snake pit is the best election graphic ever

This is the final post on the series of data visualization deployed by FiveThirtyEight to explain their election forecasting model. The previous posts are here, here and here.

I'm saving the best for last. 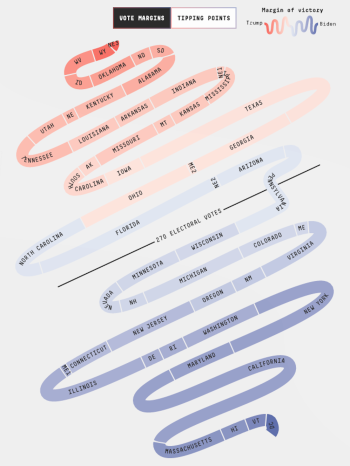 This snake-pit chart brings me great joy - I wish I came up with it!

This chart wins by focusing on a limited set of questions, and doing so excellently. As with many election observers, we understand that the U.S. presidential election will turn on so-called "swing states," and the candidates' strength in these swing states are variable, as the name suggests. Thus, we like to know which states are in play, and within these states, which ones are most unpredictable.

This chart lines up all the states from the reddest of red up top to the bluest of blue at the bottom. Each state is ranked by the voting margin predicted by 538's election forecasting model. The swing states are found in the middle.

Since each state confers a fixed number of electoral votes, and a candidate must amass 270 to win, there is a "tipping" state. In the diagram above, it's Pennsylvania. This pivotal state is neatly foregrounded as the one crossing the line in the middle.

The lengths of the segments correspond to the number of electoral votes and so do not change with the data. What change are the sequencing of the segments, and the color shading.

This data visualization is a gem of visual story-telling. The form lends itself to a story.

The snake-pit chart succeeds by not doing too much. There are many items that the chart does not directly communicate.

The exact number of electoral votes by state is not explicit, nor is it easy to compare the lengths of bending segments. The color scale for conveying the predicted voting margins is crude, and it's not clear what is the difference between a deep color and a light color. It's also challenging to learn the electoral vote split; the actual winning margin is not even stated.

The reality is the average reader doesn't care. I got everything I wanted from the chart, and I ain't got the time to explore every state.

There is a hover-over effect that reveals some of the additional information: 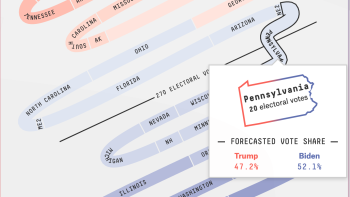 One can keep going on. I have no idea how the 40,000 scenarios presented in the other graphics in this series have been reduced to the forecast shown in the inset. But again, those omissions did not lessen my enjoyment. The point is: let your graphics breathe.

I'm thinking of potential variations even though I'm fully satisfied with this effort.

I wonder if the color shading should be reversed. The light shading encodes a smaller voting margin, which indicates a tighter race. But our attention is typically drawn first to the darker shades. If the shading scheme is reversed, the color should be described as how tight the race is.

I also wonder if a third color (purple) should be introduced. Doing so would require the editors to make judgment calls on which set of states are swing states.

One strange thing about election day is the specific sequence of when TV stations (!) call the state results, which not only correlates with voting margin but also with time zones. I wonder if the time zone information can be worked into the sequencing of segments.

Let me know what you think of these ideas, or leave your own ideas, in the comments below.

I have already praised this graphic when it first came out in 2016. (link)

A key improvement is tilting the chart, which avoids vertical state labels.

The previous post was written around election day 2016. The snake pit further cements its status as a story-telling device. As states are called, they are taken out of the picture. So it works very well as a dynamic chart on election day.

I'm nominating this snake-pit chart as the best election graphic ever. Kudos to the FiveThirtyEight team.