Bloomberg made me digest these graphics slowly

Ask the experts to name the success metric of good data visualization, and you will receive a dozen answers. The field doesn't have an all-encompassing metric. A useful reference is Andrew Gelman and Antony Urwin (2012) in which they discussed the tradeoff between beautiful and informative, which derives from the familiar tension between art and science.

For a while now, I've been intrigued by metrics that measure "effort". Some years ago, I described the concept of a "return on effort" in this post. Such a metric can be constructed like the dominating financial metric of return on investment. The investment here is an investment of time, of attention. I strongly believe that if the consumer judges a data visualization to be compelling, engaging or  ell constructed, s/he will expend energy to devour it.

Imagine grub you discard after the first bite, compared to the delicious food experienced slowly, savoring every last bit. I'm writing this post while enjoying the September issue of Bloomberg Businessweek, which focuses on the upcoming U.S. Presidential election. There are various graphics infused into the pages of the magazine. Many of these graphics operate at a level of complexity above what typically show up in magazines, and yet I spent energy learning to understand them. This response, I believe, is what visual designers should aim for.

The article argues that a town like Ambridge in Beaver County, Pennslyvania may be pivotal in the November election. The set of graphics provides relevant data to understand this argument.

It's evidence that data visualization does not need whiz-bang modern wizardry to excel.

Let me focus on the boxy charts from the top of the column. These: 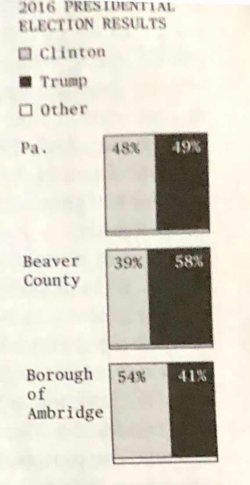 These charts solve a headache with voting margin data in the U.S.  We have two dominant political parties so in any given election, the vote share data split into three buckets: Democratic, Republican, and a catch-all category that includes third parties, write-ins, and none of the above. The third category rarely exceeds 5 percent.  A generic pie chart representation looks like this:

Stacked bars have this look: 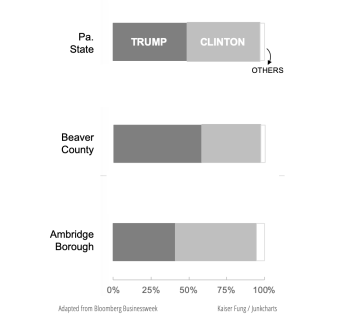 In using my Trifecta framework (link), the top point is articulating the question. The primary issue here is the voting margin between the winner and the second-runner-up, which is the loser in what is typically a two-horse race. There exist two sub-questions: the vote-share difference between the top two finishers, and the share of vote effectively removed from the pot by the remaining candidates.

Now, take another look at the unusual chart form used by Bloomberg:

The catch-all vote share sits at the bottom while the two major parties split up the top section. This design demonstrates a keen understanding of the context. Consider the typical outcome, in which the top two finishers are from the two major parties. When answering the first sub-question, we can choose the raw vote shares, or the normalized vote shares. Normalizing shifts the base from all candidates to the top two candidates.

The Bloomberg chart addresses both scales. The normalized vote shares can be read directly by focusing only on the top section. In an even two-horse race, the top section is split by half - this holds true regardless of the size of the bottom section.

This is a simple chart that packs a punch.