A twitter follower sent me this chart by way of Munich: 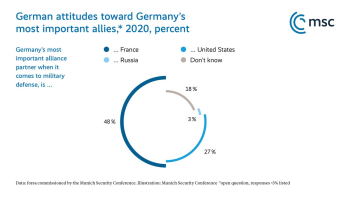 The logo of the Munich Security Conference (MSC) is quite cute. It looks like an ear. Perhaps that inspired this, em, staggered donut chart.

I like to straighten curves out so the donut chart becomes a bar chart:

The blue and gray bars mimic the lengths of the arcs in the donut chart. The yellow bars show the relative size of the underlying data. You can see that three of the four arcs under-represent the size of the data.

Why is that so? It's due to the staggering. Inner circles have smaller circumferences than outer circles. The designer keeps the angles the same so the arc lengths have been artificially reduced.

The donut chart is just a pie chart with a hole punched in the middle. For both pie charts and donut charts, the data are encoded in the angles at the center of the circle. Under normal circumstances, pie charts can also be read by comparing sector areas, and donut charts using arc lengths, as those are proportional to the angles.

The area and arc interpretation fails when the designer alters the radii of the sections. Look at the following pair of pie charts, produced by filling the hole in the above donuts: 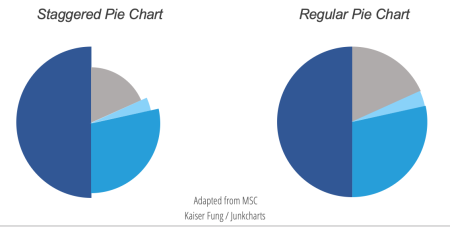