Unlocking the secrets of a marvellous data visualization 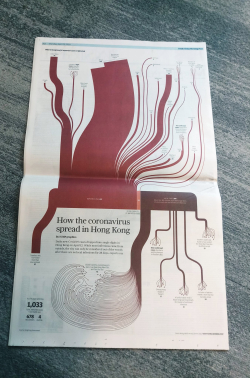 The graphics team in my hometown paper SCMP has developed a formidable reputation in data visualization, and I lapped every drop of goodness on this beautiful graphic showing how the coronavirus spread around Hong Kong (in the first wave in April). Marcelo uploaded an image of the printed version to his Twitter. This graphic occupied the entire back page of that day's paper.

An online version of the chart is found here.

The data graphic is a masterclass in organizing data. While it looks complicated, I had no problem unpacking the different layers.

Cases were divided into imported cases (people returning to Hong Kong) and local cases. A small number of cases are considered in-betweens.

The two major classes then occupy one half page each. I first looked at the top half, where my attention is drawn to the thickest flows. The majority of imported cases arrived from the U.K., and most of those were returning students. The U.S. is the next largest source of imported cases. The flows are carefully ordered by continent, with the Americas on the left, followed by Europe, Middle East, Africa, and Asia. 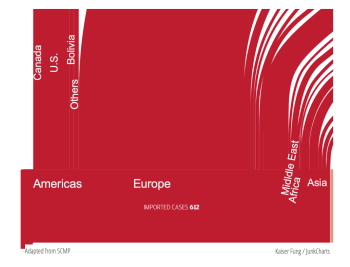 Where there are interesting back stories, the flow blossoms into a flower. An annotation explains the cluster of cases. Each anther represents a case. Eight people caught the virus while touring Bolivia together. 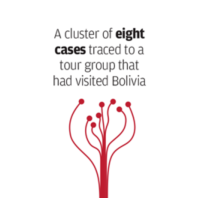 One reads the local cases in the same way. Instead of flowers, think of roots. The biggest cluster by far was a band that played at clubs in three different parts of the city, infecting a total of 72 people. 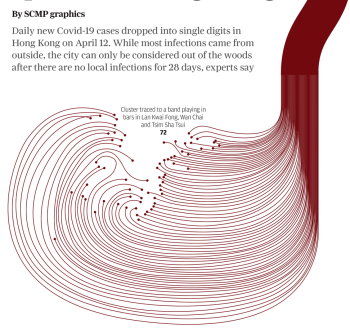 Everything is understood immediately, without a need to read text or refer to legends. The visual elements carry that kind of power.

This data graphic presents a perfect amalgam of art and science. For a flow chart, the data are encoded in the relative thickness of the lines. This leaves two unused dimensions of these lines: the curvature and lengths. The order of the countries and regions take up the horizontal axis, but the vertical axis is free. Unshackled from the data, the designer introduced curves into the lines, varied their lengths, and dispersed their endings around the white space in an artistic manner.

The flowers/roots present another opportunity for creativity. The only data constraint is the number of cases in a cluster. The positions of the dots, and the shape of the lines leading to the dots are part of the playground.

What's more, the data visualization is a powerful reminder of the benefits of testing and contact tracing. The band cluster led to the closure of bars, which helped slow the spread of the coronavirus.