Junk Charts
Welcome Twitter About Book Blog RSS
Election visuals 2: informative and playful
Why you should expunge the defaults from Excel or (insert your favorite graphing program)

Continuing our review of FiveThirtyEight's election forecasting model visualization (link), I now look at their headline data visualization. (The previous posts in this series are here, and here.) 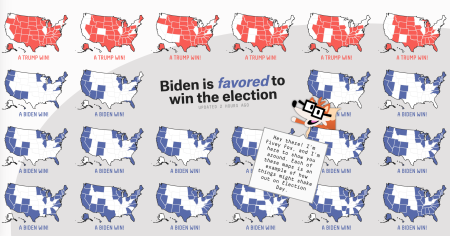 It's a set of 22 maps, each showing one election scenario, with one candidate winning. What chart form is this?

Small multiples may come to mind. A small-multiples chart is a grid in which every component graphic has the same form - same chart type, same color scheme, same scale, etc. The only variation from graphic to graphic is the data. The data are typically varied along a dimension of interest, for example, age groups, geographic regions, years. The following small-multiples chart, which I praised in the past (link), shows liquor consumption across the world. 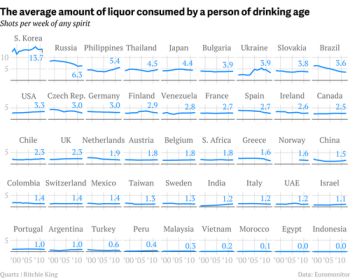 Each component graphic changes according to the data specific to a country. When we scan across the grid, we draw conclusions about country-to-country variations. As with convention, there are as many graphics as there are countries in the dataset. Sometimes, the designer includes only countries that are directly relevant to the chart's topic.

What is the variable FiveThirtyEight chose to vary from map to map? It's the scenario used in the election forecasting model.

This choice is unconventional. The 22 scenarios is a subset of the 40,000 scenarios from the simulation - we are left wondering how those 22 are chosen.

Returning to our question: what chart form is this?

Perhaps you're reminded of the dot plot from the previous post. On that dot plot, the designer summarized the results of 40,000 scenarios using 100 dots. Since Biden is the winner in 75 percent of all scenarios, the dot plot shows 75 blue dots (and 25 red).

Is it a pictogram of maps? If we ignore the details on the maps, and focus on the counts of colors, then yes. It's just a bit challenging because of the hole in the middle, and the atypical number of maps.

As with the dot plot, the map details are a nice touch. It connects readers with the simulation model which can feel very abstract.

Oddly, if you're someone familiar with probabilities, this presentation is quite confusing.

With 40,000 scenarios reduced to 22 maps, each map should represent 1818 scenarios. On the dot plot, each dot should represent 400 scenarios. This follows the rule for creating pictograms. Each object in a pictogram - dot, map, figurine, etc. - should encode an equal amount of the data. For the 538 visualization, is it true that each of the six red maps represents 1818 scenarios? This may be the case but not likely.

Recall the dot plot where the most extreme red dot shows a scenario in which Trump wins 376 out of 538 electoral votes (margin = 214). Each dot should represent 400 scenarios. The visualization implies that there are 400 scenarios similar to the one on display. For the grid of maps, the following red map from the top left corner should, in theory, represent 1,818 similar scenarios. Could be, but I'm not sure. 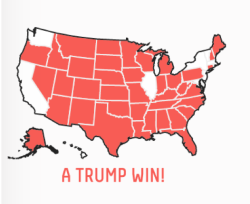 So, the right way to read the 538 chart is to ignore the map details when reading the embedded pictogram, and then look at the small multiples of detailed maps bearing in mind that extreme scenarios are unique while median scenarios have many lookalikes.

(Come to think about it, the analogous situation in the liquor consumption chart is the relative population size of different countries. When comparing country to country, we tend to forget that the data apply to large numbers of people in populous countries, and small numbers in tiny countries.)

There's a small improvement that can be made to the detailed maps. As I compare one map to the next, I'm trying to pick out which states that have changed to change the vote margin. Conceptually, the number of states painted red should decrease as the winning margin decreases, and the states that shift colors should be the toss-up states.

So I'd draw the solid Republican (Democratic) states with a lighter shade, forming an easily identifiable bloc on all maps, while the toss-up states are shown with a heavier shade. 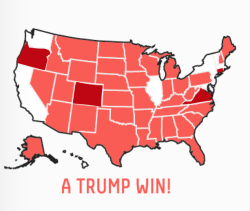 Here, I just added a darker shade to the states that disappear from the first red map to the second.