Twitterstan wanted to vote the following infographic off the island: 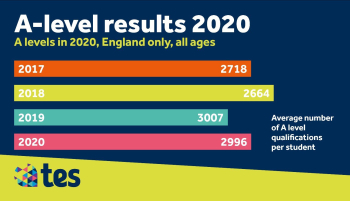 (The publisher's website is here but I can't find a direct link to this graphic.)

The mishap is particularly galling given the controversy swirling around this year's A-Level results in the U.K. For U.S. readers, you can think of A-Levels as SAT Subject Tests, which in the U.K. are required of all university applicants, and represent the most important, if not the sole, determinant of admissions decisions. Please see the upcoming post on my book blog for coverage of the brouhaha surrounding the statistical adjustments (to be posted sometime this week, it's here.).

The first issue you may notice about the chart is that the bar lengths have no relationship with the numbers printed on them. Here is a scatter plot correlating the bar lengths and the data.

As you can see, nothing.

Then, you may wonder what the numbers mean. The annotation at the bottom right says "Average number of A level qualifications per student". Wow, the British (in this case, English) education system is a genius factory - with the average student mastering close to three thousand subjects in secondary (high) school!

TES is the cool name for what used to be the Times Educational Supplement. I traced the data back to Ofqual, which is the British regulator for these examinations. This is the Ofqual version of the above chart: 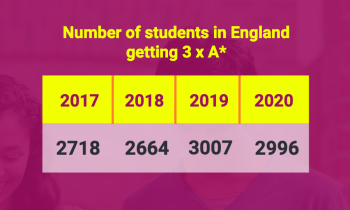 The data match. You may see that the header of the data table reads "Number of students in England getting 3 x A*". This is a completely different metric than number of qualifications - in fact, this metric measures geniuses. "A*" is the U.K. equivalent of "A+". When I studied under the British system, there was no such grade. I guess grade inflation is happening all over the world. What used to be A is now A+, and what used to be B is now A. Scoring three A*s is tops - I wonder if this should say 3 or more because I recall that you can take as many subjects as you desire but most students max out at three (may have been four).

***
Now, the next section of the Ofqual infographic resolves the mystery. Here is the chart: 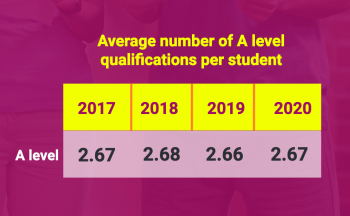 This dataset has the right units and measurement. There is almost no meaningful shift in the last four years. The average number of qualifications per student is only different at the second decimal place. Replacing the original data with this set removes the confusion. 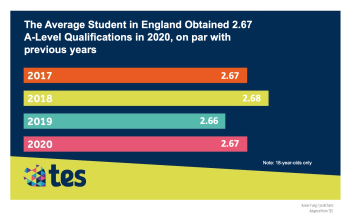 While I was re-making this chart, I also cleaned out the headers and sub-headers. This is an example of software hegemony: the designer wouldn't have repeated the same information three times on a chart with four numbers if s/he wasn't prompted by software defaults.

The corrected chart violates one of the conventions I described in my tutorial for DataJournalism.com: color difference should reflect data difference.

In the following side-by-side comparison, you see that the use of multiple colors on the left chart signals different data - note especially the top and bottom bars which carry the same number, but our expectation is frustrated.

[P.S. 8/25/2020. Dan V. pointed out another problem with these bar charts: the bars were truncated so that the bar lengths are not proportional to the data. The corrected chart is shown on the right below:

You truncated the bar lengths, showing more than a 1/266 difference between a 2.66 and 2.67, which also skews the relationship between length and number.