Junk Charts
Welcome Twitter About Book Blog RSS
Everything in Texas is big, but not this BIG
Ask how you can give

How many details to include in a chart

This graphic by Bloomberg provides the context for understanding the severity of the Atlantic storm season. (link) 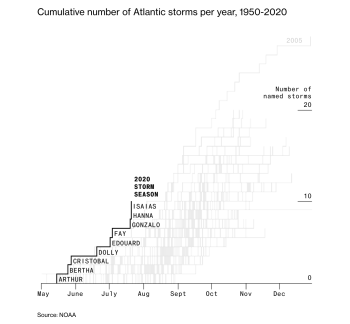 At this point of the season, 2020 appears to be one of the most severe in history.

I was momentarily fascinated by a feature of modern browser-based data visualization: the death of the aspect ratio. When the browser window is stretched sufficiently wide, the chart above is transformed to this look: 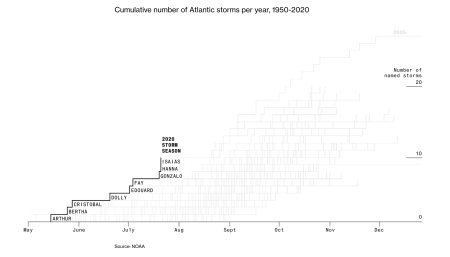 The chart designer has lost control of the aspect ratio.

This Bloomberg chart is an example of the spaghetti-style plots that convey variability by displaying individual units of data (here, storm years). The envelope of the growth curves gives the range of historical counts while the density of curves roughly offers some sense of the most likely counts at different points of the season.

But these spaghetti-style plots are not precise at conveying the variability because the density is hard to gauge. That's where aggregating the individual units helps.

The following chart does not show individual storm years. It shows the counts for the median season at selected points in time, and also a band of variability (for example, you'd include say 90 or 95% of the seasons). 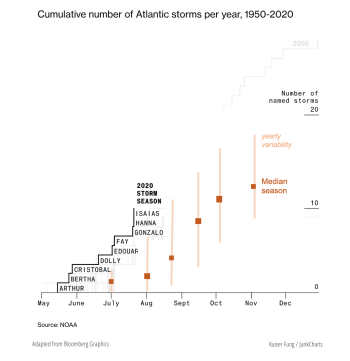 I don't have the raw data so the aggregating is done by eyeballing the spaghetti.

I prefer this presentation even though it does not plot every single data point one has in the dataset.