Ask how you can give

A reader and colleague Georgette A was frustrated with the following graphic that appeared in the otherwise commendable article in National Geographic (link). The NatGeo article provides a history lesson on past pandemics that killed millions. 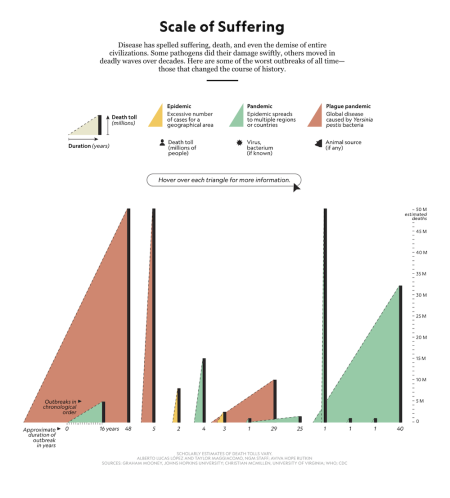 What does the design want to convey to readers?

An immediate curiosity is why a green triangle is lodged in the middle of the red triangle. Answering this question requires figuring out the horizontal layout. Where we expect axis labels we find an unexpected series of numbers (0, 16, 48, 5, 2, 4, ...). These are durations that measure the widths of the triangular bases.

To solve this puzzle, imagine the chart with the triangles removed, leaving just the black columns. Now replace the durations with index numbers, 1 to 13, corresponding to the time order of the ending years of these epidemics. In other words, there is a time axis hidden behind the chart. [As Ken reminded me on Twitter, I forgot to mention that details of each pandemic are revealed by hovering over each triangle.]

This explains why the green triangle (Antonine Plague) is sitting inside the large red triangle (Plague of Justinian). The latter's duration is 3 times that of the former, and the Antonine Plague ended before the Plague of Justinian. In fact, the Antonine occurred during 165-180 while the Justinian happened during 541-588. The overlap is an invention of the design. To receive what the design gives, we have to think of time as a sequence, not of dates.

This is a pretty tough dataset to visualize. Here is a side-by-side bar chart that lets readers first compare deaths, and then compare durations. 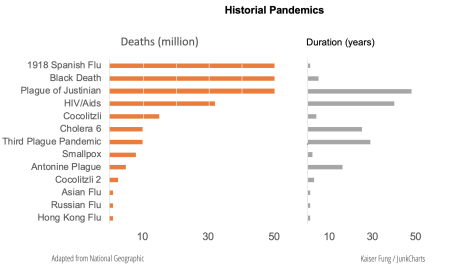 In the meantime, I highly recommend the NatGeo article.

Presumably you could encode average (rather than total) deaths per year in the height to give a more intuitive interpretation of volume=total deaths?

One key third bar graph column to include is average deaths per common unit time. This would give a visual of the INTENSITY of the pandemic, which is a major characteristic humans notice, and would relatively compare these occurrences well.

C, M: Theoretically yes but I'd be concerned about painting a misleading picture of equal intensity throughout the duration, for those pandemics that lasted decades. If there are data on the intensity over time, then it should work.