The Economist illustrated some interesting consumer research with this chart (link): 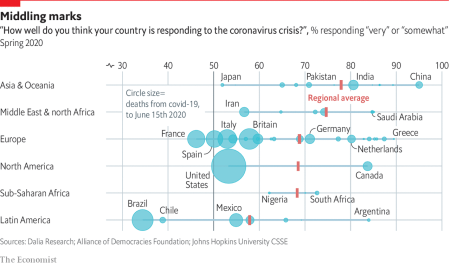 The survey by Dalia Research asked people about the satisfaction with their country's response to the coronavirus crisis. The results are reduced to the "Top 2 Boxes", the proportion of people who rated their government response as "very well" or "somewhat well".

This dimension is laid out along the horizontal axis. The chart is a combo dot and bubble chart, arranged in rows by region of the world. Now what does the bubble size indicate?

It took me a while to find the legend as I was expecting it either in the header or the footer of the graphic. A larger bubble depicts a higher cumulative number of deaths up to June 15, 2020.

The key issue is the correlation between a country's death count and the people's evaluation of the government response.

Bivariate correlation is typically shown on a scatter plot. The following chart sets out the scatter plots in a small multiples format with each panel displaying a region of the world. 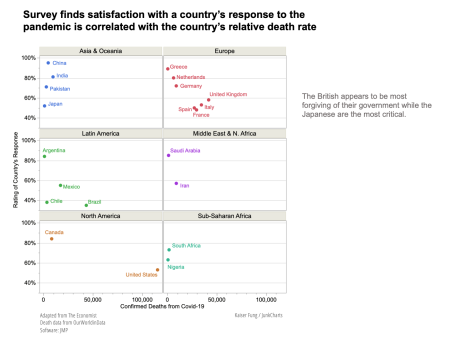 The death tolls in the Asian countries are low relative to the other regions, and yet the people's ratings vary widely. In particular, the Japanese people are pretty hard on their government.

In Europe, the people of Greece, Netherlands and Germany think highly of their government responses, which have suppressed deaths. The French, Spaniards and Italians are understandably unhappy. The British appears to be the most forgiving of their government, despite suffering a higher death toll than France, Spain or Italy. This speaks well of their PR operation.

Cumulative deaths should be adjusted by population size for a proper comparison across nations. When the same graphic is produced using deaths per million (shown on the right below), the general story is preserved while the pattern is clarified: 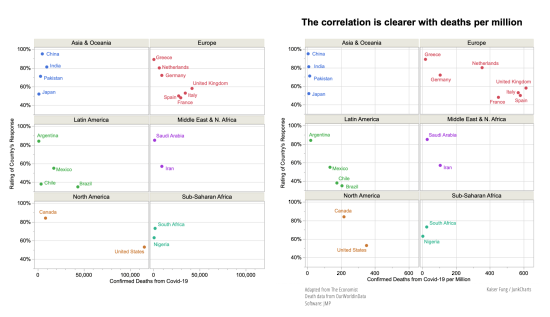 In the original Economist chart, what catches our attention first is the bubble size. Eventually, we notice the horizontal positioning of these bubbles. But the star of this chart ought to be the new survey data. I swapped those variables and obtained the following graphic: 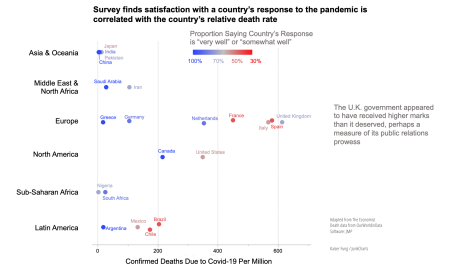 Instead of using bubble size, I switched to using color to illustrate the deaths-per-million metric. If ratings of the pandemic response correlate tightly with deaths per million, then we expect the color of these dots to evolve from blue on the left side to red on the right side.

The peculiar loss of correlation in the U.K. stands out. Their PR firm deserves a bonus!

Very good - and I reckon you could double-encode satisfaction rates by turning the bubbles into coloured emojis ranging from blue :-) through grey :-| to red :-(

Nice work. I went a step further with your deaths per million scatter chart. I extracted the data from your Europe chart using the excellent WebPlotDigitizer and ran a linear model in R to get a line of best fit. I then looked at the residuals ie how much above or below the line each country is. The Netherlands is 14 units above the line compared to the UK which is only 7 units above. This suggests that the Netherlands' PR team needs an even bigger bonus!