Junk Charts
Welcome Twitter About Book Blog RSS
Visualizing black unemployment in the U.S.
When the pie chart is more complex than the data

What is the price for objectivity

I knew I had to remake this chart. 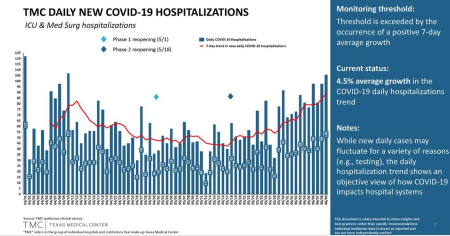 The simple message of this chart is hidden behind layers of visual complexity. What the analyst wants readers to focus on (as discerned from the text on the right) is the red line, the seven-day moving average of new hospital admissions due to Covid-19 in Texas.

Here's a version that brings out the message: after Phase 2 re-opening, the number of hospital admissions has been rising steadily. 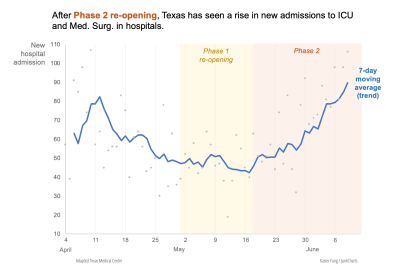 Dots are used in place of columns, which push these details to the background. The line as well as periods of re-opening are directly labeled, removing the need for a legend. 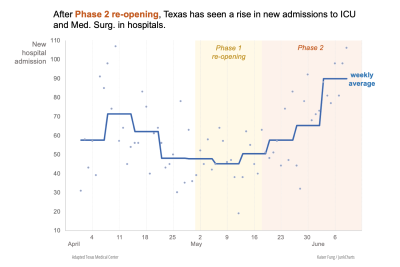 This chart plots the weekly average new hospital admissions, instead of the seven-day moving average. In the previous chart, the raggedness of moving average isn't transmitting any useful information to the average reader. I believe this weekly average metric is easier to grasp for many readers while retaining the general story.

On the original chart by TMC, the author said "the daily hospitalization trend shows an objective view of how COVID-19 impacts hospital systems." Objectivity is an impossible standard for any kind of data analysis or visualization. As seen above, the two metrics for measuring the trend in hospitalizations have pros and cons. Even if one insists on using a moving average, there are choices of averaging methods and window sizes.

Scientists are trained to believe in objectivity. It frequently disappoints when we discover that the rest of the world harbors no such notion. If you observe debates between politicians or businesspeople or social scientists, you rarely hear anyone claim one analysis is more objective - or less subjective - than another. The economist who predicts Dow to reach a new record, the business manager who argues for placing discounted products in the front not the back of the store, the sportscaster who maintains Messi is a better player than Ronaldo: do you ever hear these people describe their methods as objective?

Pursuing objectivity leads to the glorification of data dumps. The scientist proclaims disinterest in holding an opinion about the data. This is self-deception though. We clearly have opinions because when someone else  "misinterprets" the data, we express dismay. What is the point of pretending to hold no opinions when most of the world trades in opinions? By being "objective," we never shape the conversation, and forever play defense.

The objectivity is certainly not perfect. Perhaps the intent is to use hospitalizations rather than reported cases or reported deaths due to the difficulties in those measures: reported cases depend upon the extend of testing and reported deaths can be "subjective" if testing was not performed or if there were other factors involved in the death.
Would a phrase like "not easily manipulated" data be more appropriate?

Hi Dave, it's a matter of degree so you are on the right track. Even hospitalizations have been manipulated as there have been stories that hospitals sent sick patients to nursing homes (both in the US and abroad). Related to the "objectivity" imperative is the "see no evil" posture. It seems that we are trained to believe what is reported (media, scientific journals) and not suspect foul play until and unless clear evidence has been found. This posture minimizes false positives (accusations) but for sure enables false negatives (unreported foul play). In the era of Big Data, I'm dubious about such a posture as it is too easy to generate any kind of result to one's liking.