The discontent of circular designs

The textbook method to visualize this pair is to plot two bars. One bar in the positive direction, the other in the negative direction. The chart is clear (more on the analysis later). 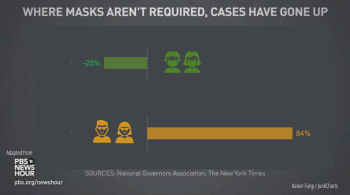 But some find this graphic ugly. They don’t like straight lines, right angles and such. They prefer circles, and bends. Like PBS, who put out the following graphic that was forwarded to me by Fletcher D. on twitter: 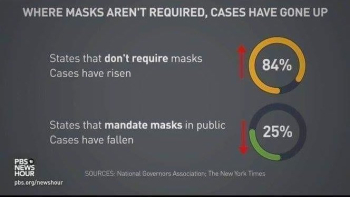 Bending the columns is not as simple as it seems. Notice that the designer adds red arrows pointing up and down. Because the circle rounds onto itself, the sense of direction is lost. Now, readers must pick up the magnitude and the direction separately. It doesn’t help that zero is placed at the bottom of the circle.

Can we treat direction like we would on a bar chart? Make counter-clockwise the negative direction. This is what it looks like: 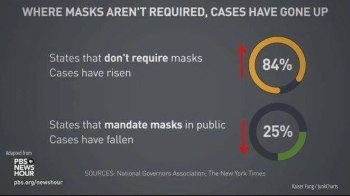 But it’s confusing. I made the PBS design worse because now, the value of each position on the circle depends on knowing whether the arrow points up or down. So, we couldn’t remove those red arrows.

The limitations of the “racetrack” design reveal themselves in similar data that are just a shade different. Here are a couple of scenarios to ponder:

For a Trifecta Checkup (link), I'd also have concerns about the analytics. There are so many differences between the states that have required masks and states that haven't - the implied causality is far from proven by this simple comparison. For example, it would be interesting to see the variability around these averages - by state or even by county.

I think the only solution with this type of analysis is to just show the numbers. If readers need a graph then they probably won't understand it either.

On the numbers themselves, it would be interesting to have seen the original web page. One of the aspects of COVID-19 is that it seems to have set medical statistics back 50 years or more, to a time when everyone accepted observational data without any attempt to rectify the biases. Since then we have developed increasingly sophisticated methods of dealing with data but there is very little attempt to apply it, or to recognise the problems.

Face masks probably help, but They are far from being the solution that some people argue. Most transmission events occur in situations where people are less likely to wear face masks. What seems to work is when people are either ordered not to, or too scared to interact with other people.

Ken: Good points. I believe there are two excuses for sprinting backwards. First is self-imposed urgency. This reminds me of business settings in which there is never enough time to collect the right data when it is believed that the inferior data conform to the preconceived stories. While I don't think the scientists here hold this mentality, it is unavoidable that using observational data makes us all vulnerable to narrative bias.

Second is more ingrained, I'm afraid - the research journal culture of ignoring biases so long as they are explicitly stated. There are so many articles in which the stated limitations make a mockery of the analyical conclusion. This all seems okay until the conclusions have real-life impact during a pandemic!

Let's not forget political interference. I've heard that initially CDC told Americans that face masks are useless because "they wanted to make sure front-line workers have enough supplies". If true, CDC told a blatant lie. The problem is once you let political consideration like this enter the picture, you've opened yourself to conspiracy theories on everything you do.