Junk Charts
Welcome Twitter About Book Blog RSS
The missing 100 million: how the pandemic reveals the fallacy of not in labor force
Hope and reality in one Georgia chart

How the pandemic affected employment of men and women

In the last post, I looked at the overall employment situation in the U.S. Here is the trend of the "official" unemployment rate since 1990. 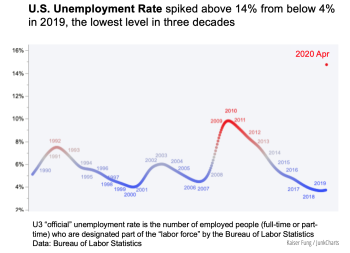 I was talking about the missing 100 million. These are people who are neither employed nor unemployed in the eyes of the Bureau of Labor Statistics (BLS). They are simply unrepresented in the numbers shown in the chart above.

This group is visualized in my scatter plot as "not in labor force", as a percent of the employment-age population. The horizontal axis of this scatter plot shows the proportion of employed people who hold part-time jobs. Anyone who worked at least one hour during the month is counted as employed part-time.

Today, I visualize the differences between men and women.

The first scatter plot shows the situation for men: 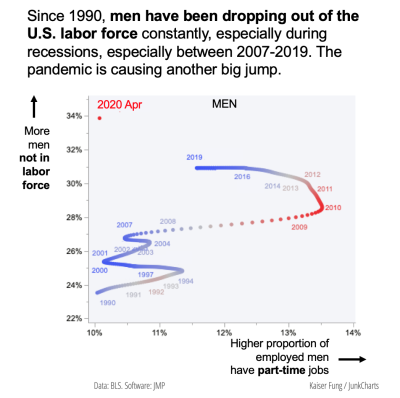 This plot reveals a long-term structural problem for the U.S. economy. Regardless of the overall economic health, more and more men have been declared not in labor force each year. Between 2007, the start of the Great Recession to 2019, the proportion went up from 27% to 31%, and the pandemic has pushed this to almost 34%. As mentioned in the last post, this sharp rise in April raises concern that the criteria for "not in labor force" capture a lot of people who actually want a job, and therefore should be counted as part of the labor force but unemployed.

Also, as seen in the last post, the severe drop in part-time workers is unprecedented during economic hardship. As dots turn from blue to red, they typically are moving right, meaning more part-time workers. Since the pandemic, among those people still employed, the proportion holding full-time jobs has paradoxically exploded.

The second scatter plot shows the situation with women: 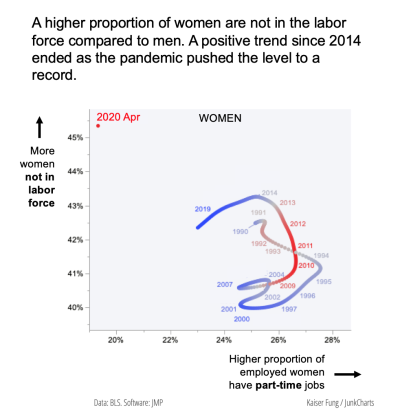 Women have always faced a tougher job market. If they are employed, they are more likely to be holding part-time jobs relative to employed men; and a significantly larger proportion of women are not in the labor force. Between 1990 and 2001, more women entered the labor force. Just like men, the Great Recession resulted in a marked jump in the proportion out of labor force. Since 2014, a positive trend emerged, now interrupted by the pandemic, which has pushed both metrics to levels never seen before.

The same story persists: the sharp rise in women "not in labor force" exposes a problem with this statistic - as it apparently includes people who do want to work, not as intended. In addition, unlike the pattern in the last 30 years, the severe economic crisis is coupled with a shift toward full-time employment, indicating that part-time jobs were disappearing much faster than full-time jobs.

Why did you decide to use different scales for Men and women for this example?

S: If I used the same scale, I'd have used one chart as the data exist in non-overlapping regions. There is too much going on on the same chart if everything is on one - I'm following the advice I recently offered against packing too many messages on one chart. Instead, pace your story properly. Now, when I'm doing separate plots and the men/women clusters exist in non-overlapping regions, using the same scale means most of the plot areas are empty.

It's always good practice to sketch your ideas (can be hand sketch for a quick view). Since I like your comment, I started sketching what a single chart looks like. Notice that the part-time proportion for men was between 10 and 14% (a range of 4%), and the low-end of the range for women is 20%, thus, the gap between the maximum for men and the minimum for women is 6%, which is larger than the full range for men. You could imagine how much empty space is created by forcing the same scale.