Junk Charts
Welcome Twitter About Book Blog RSS
Twitter people UpSet with that Covid symptoms diagram
The missing 100 million: how the pandemic reveals the fallacy of not in labor force

Like many others, some Floridians are questioning their state's Covid statistics. It's clear there are numerous "degrees of freedom" for politicians to manipulate the numbers. What's not clear is who's influencing these decisions. Are they public-health experts, donors, voters, or whom?

A Twitter follower sent in the following chart, embedded in an informative article in Sun-Sentinel: 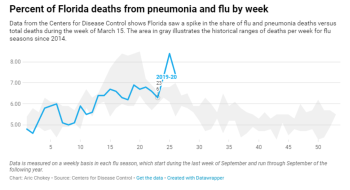 I like the visual design. It's clean, and conveys a moderately complex concept effectively. The reader may not immediately get what metrics are being plotted but the idea that the blue line should operate within the gray area.. until it doesn't is easily grasped. The range is technically an uncertainty band.

The metric is the proportion of total deaths (all causes) that are attributed to pneumonia and flu. Typical influenza deaths are found in that category. This chart investigates whether there were excess (unexplained) P&F deaths. The gray band measures the variability in the proportions of past years. When the blue line operates inside the band, the metric is normal. When it pierces the upper band, which happened here around week 25, a rare event has occurred.

The concern on Twitter was about the horizontal axis. Those integer labels can be confusing. The designer places a "how to read this" message in a footnote, explaining that week 1 is the first week of a typical flu season (which corresponds to late September 2019). This nugget of information helps a lot. We can see that the flu season peaks around week 20, and by the spring, it should be waning. Not so in 2020.

It's hard to escape the conclusion that deaths from Covid-19 are hiding inside the statistics of Pneumonia & Flu. As a statistician, I want to tell you Statistics Don't Lie! You can hide the data along one dimension, but they show up elsewhere. Misclassifying the deaths does buy someone some time. It takes a few weeks to compile all-cause mortality data (gasp, the CDC said mortality records are only 75 percent accurate after 8 weeks!)

The other small problem with the chart is the labeling. Neither axis has labels. The data label that shows up when you click on the line might be a default from the software that can't be turned off. It shows the two numbers being plotted without labels.

Here is a re-working of the chart that tells the story: 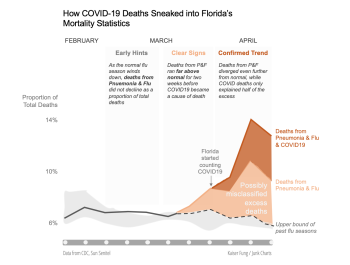 The proportion of deaths attributed to P&F and Covid together is roughly double the upper end of what Florida should be seeing this time of the year (without Covid). Covid-19 accounts for half the gap. The other half are still being classified as P&F. However, I suspect CDC will adjust these numbers later to reflect the reality. (In making this chart, I also learned that Florida stopped including seasonal visitors in the death counts. This is egregious manipulation. If someone died while in Florida, they should be counted. I didn't investigate whether this counting rule applies only to Covid-19 deaths, or to deaths from all causes. If they had always done that, then I might give them a pass.)

There must be something juicy on the previous influenza page, no?

Lastly, when you look at my chart, please pretend that the last week is not on there. In all likelihood, the "drop" is fake because the mortality data have not been fully updated. My chart contains one more week than the Sun Sentinel chart. So you can see that the drastic decline shown on their chart turned up a big uptick on mine (next to last week).

This is a common mistake on many charts I see these days. Half-baked numbers are shown next to fully-baked ones.

Very nice detective work. I like the clean and informative redux of P&F vs Time chart. Thanks for posting.