Hope and reality in one Georgia chart

Over the weekend, Georgia's State Health Department agitated a lot of people when it published the following chart: 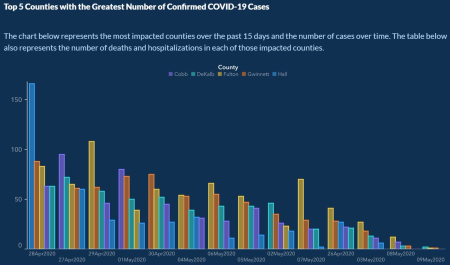 (This might have appeared a week ago as the last date on the chart is May 9 and the title refers to "past 15 days".)

They could have avoided the embarrassment if they had read my article at DataJournalism.com (link). In that article, I lay out a set of the "unspoken conventions," things that visual designers are, or should be, doing more or less in their sleep. Under the section titled "Order", I explain the following two "rules":

In the chart above, the natural order for the horizontal (time) axis is time running left to right. The order chosen by the designer  is roughly but not precisely decreasing height of the tallest column in each daily group. Many observers suggested that the columns were arranged to give the appearance of cases dropping over time.

Within each day, the counties are ordered in decreasing number of new cases. The title of the chart reads "number of cases over time" which sounds like cumulative cases but it's not. The "lead" changed hands so many times over the 15 days, meaning the data sequence was extremely noisy, which would be unlikely for cumulative cases. There are thousands of cases in each of these counties by May. Switching the order of the columns within each daily group defeats the purpose of placing these groups side-by-side.

Responding to the bad press, the department changed the chart design for this week's version: 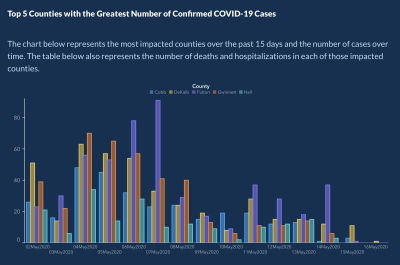 This chart now conforms to the two spoken rules described above. The time axis runs left to right, and within each group of columns, the order of the counties is maintained.

The chart is still very noisy, with no apparent message.

Next, I'd like to draw your attention to a Data issue. Notice that the 15-day window has shifted. This revised chart runs from May 2 to May 16, which is this past Saturday. The previous chart ran from Apr 26 to May 9.

Here's the data for May 8 and 9 placed side by side. 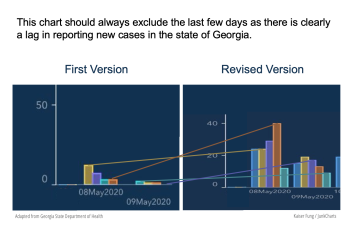 There is a clear time lag of reporting cases in the State of Georgia. This chart should always exclude the last few days. The case counts keep going up until it stabilizes. The same mistake occurs in the revised chart - the last two days appear as if new cases have dwindled toward zero when in fact, it reflects a lag in reporting.

The disconnect between the Question being posed and the quality of the Data available dooms this visualization. It is not possible to provide a reliable assessment of the "past 15 days" when during perhaps half of that period, the cases are under-counted.

This graphical distortion due to "immature" data has become very commonplace in Covid-19 graphics. It's similar to placing partial-year data next to full-year results, without calling out the partial data.

The following post from the ancient past (2005!) about a New York Times graphic shows that calling out this data problem does not actually solve it. It's a less-bad kind of thing.

The coronavirus data present more headaches for graphic designers than the financial statistics. Because of accounting regulations, we know that only the current quarter's data are immature. For Covid-19 reporting, the numbers are being adjusted for days and weeks.

Practically all immature counts are under-estimates. Over time, more cases are reported. Thus, any plots over time - if unadjusted - paint a misleading picture of declining counts. The effect of the reporting lag is predictable, having a larger impact as we run from left to right in time. Thus, even if the most recent data show a downward trend, it can eventually mean anything: down, flat or up. This is not random noise though - we know for certain of the downward bias; we just don't know the magnitude of the distortion for a while.

Another issue that concerns coronavirus reporting but not financial reporting is inconsistent standards across counties. Within a business, if one were to break out statistics by county, the analysts would naturally apply the same counting rules. For Covid-19 data, each county follows its own set of rules, not just  how to count things but also how to conduct testing, and so on.

Finally, with the politics of re-opening, I find it hard to trust the data. Reported cases are human-driven data - by changing the number of tests, by testing different mixes of people, by delaying reporting, by timing the revision of older data, by explicit manipulation, ...., the numbers can be tortured into any shape. That's why it is extremely important that the bean-counters are civil servants, and that politicians are kept away. In the current political environment, that separation between politics and statistics has been breached.

Why do we have low-quality data? Human decisions, frequently political decisions, adulterate the data. Epidemiologists are then forced to use the bad data, because that's what they have. Bad data lead to bad predictions and bad decisions, or if the scientists account for the low quality, predictions with high levels of uncertainty. Then, the politicians complain that predictions are wrong, or too wide-ranging to be useful. If they really cared about those predictions, they could start by being more transparent about reporting and more proactive at discovering and removing bad accounting practices. The fact that they aren't focused on improving the data gives the game away. Here's a recent post on the politics of data.

Bar charts are the second most beloved charts after pies. By "beloved" I mean they are chosen and stuck to loyally beyond all reason. So often people are told, e.g. their bar charts shouldn't start at 500, but zero, and the bar chart fans complain that would make the data invisible. But never do they consider that this is a reason not to use a bar chart in that case.

As we see above, they stick stubbornly to the bar chart when the better course would be a line chart, such as the Financial Times is using.