Reviewing the charts in the Oxford Covid-19 study

On my sister (book) blog, I published a mega-post that examines the Oxford study that was cited two weeks ago as a counterpoint to the "doomsday" Imperial College model. These studies bring attention to the art of statistical modeling, and those six posts together are designed to give you a primer, and you don't need math to get a feel.

One aspect that didn't make it to the mega-post is the data visualization. Sad to say, the charts in the Oxford study (link) are uniformly terrible. Figure 3 is typical: 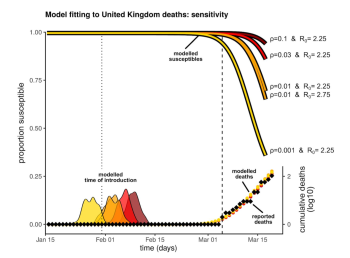 There are numerous design decisions that frustrate readers.

a) The graphic contains two charts, one on top of the other. The left axis extends floor-to-ceiling, giving the false impression that it is relevant to both charts. In fact, the graphic uses dual axes. The bottom chart references the axis shown in the bottom right corner; the left axis is meaningless. The two charts should be drawn separately.

For those who have not read the mega-post about the Oxford models, let me give a brief description of what these charts are saying. The four colors refer to four different models - these models have the same structure but different settings. The top chart shows the proportion of the population that is still susceptible to infection by a certain date. In these models, no one can get re-infected, and so you see downward curves. The bottom chart displays the growth in deaths due to Covid-19. The first death in the UK was reported on March 5.  The black dots are the official fatalities.

b) The designer allocates two-thirds of the space to the top chart, which has a much simpler message. This causes the bottom chart to be compressed beyond cognition.

c) The top chart contains just five lines, smooth curves of the same shape but different slopes. The designer chose to use thick colored lines with black outlines. As a result, nothing precise can be read from the chart. When does the yellow line start dipping? When do the two orange lines start to separate?

d) The top chart should have included margins of error. These models are very imprecise due to the sparsity of data.

e) The bottom chart should be rejected by peer reviewers. We are supposed to judge how well each of the five models fits the cumulative death counts. But three design decisions conspire to prevent us from getting the answer: (i) the vertical axis is severely compressed by tucking this chart underneath the top chart (ii) the vertical axis uses a log scale which compresses large values and (iii) the larger-than-life dots.

As I demonstrated in this post also from the sister blog, many models especially those assuming an exponential growth rate has poor fits after the first few days. Charting in log scale hides the degree of error.

f) There is a third chart squeezed into the same canvass. Notice the four little overlapping hills located around Feb 1. These hills are probability distributions, which are presented without an appropriate vertical axis. Each hill represents a particular model's estimate of the date on which the novel coronavirus entered the UK. But that date is unknowable. So the model expresses this uncertainty using a probability distribution. The "peak" of the distribution is the most likely date. The spread of the hill gives the range of plausible dates, and the height at a given date indicates the chance that that is the date of introduction. The missing axis is a probability scale, which is neither the left nor the right axis.

The bottom chart shows up in a slightly different form as Figure 1(A). 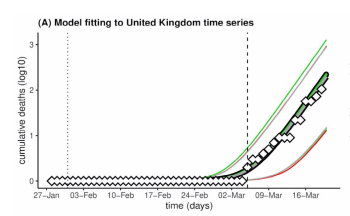 Here, the green, gray (blocked) and red thick lines correspond to the yellow/orange/red diamonds in Figure 3. The thin green and red lines show the margins of error I referred to above (these lines are not explicitly explained in the chart annotation.) The actual counts are shown as white rather than black diamonds.

Again, the thick lines and big diamonds conspire to swamp the gaps between model fit and actual data. Again, notice the use of a log scale. This means that the same amount of gap signifies much bigger errors as time moves to the right.

Also notice how the line of white diamonds makes it impossible to see what the models are doing prior to March 5, the date of the first reported death. The models apparently start showing fatalities prior to March 5. This is a key part of their conclusion - the Oxford team concluded that the coronavirus has been circulating in the U.K. even before the first infection was reported. The data visualization should therefore bring out the difference in timing.

I hope by the time the preprint is revised, the authors will have improved the data visualization.