When the visual runs away from the data

The pressure of the coronavirus news cycle has gotten the better of some graphics designers. Via Twitter, Mark B sent me the following chart: 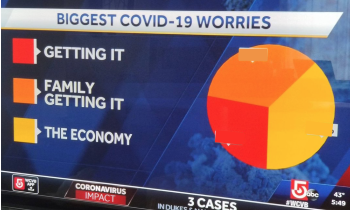 I applied the self-sufficiency test to this pie chart. That's why you can't see the data which were also printed on the chart.

The idea of self-sufficiency is to test how much work the visual elements of the graphic are doing to convey its message. Look at the above chart, and guess the three values are.

Roughly speaking, all three answers are equally popular, with perhaps a little less than a third of respondents indicating "Getting It" as their biggest COVID-19 worry.

Now, here is the same chart with the data: 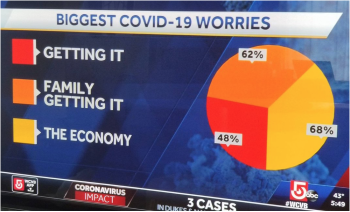 Each number is way off! In addition, the three numbers sum to 178%. 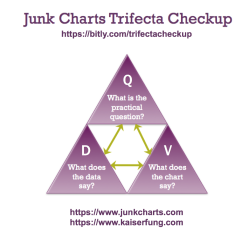 This is an example of the Visual being at odds with the Data, using a Trifecta Checkup analysis. (Read about the Trifecta here.)

What the Visual is saying is not the same as what the data are saying. So the green arrow between D and V is broken.

This is a rather common mistake. This survey question apparently allows each respondent to select more than one answers. Whenever more than one responses are accepted, one cannot use a pie chart.

Here is a stacked bar chart that does right by the data. 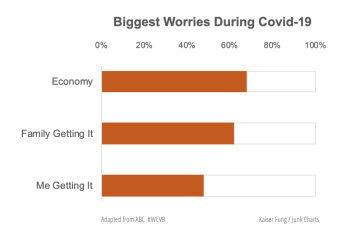