It's impossible to understand Super Tuesday, this chart says

Twitter people are talking about this chart, from NPR (link): 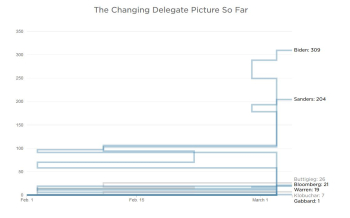 This was published on Wednesday after Super Tuesday, the day on which multiple states held their primary elections. On the Democratic side, something like a third of the delegates were up for grabs (although as the data below this chart shows, a big chunk of the delegates, mostly from California and Texas, have yet to be assigned to a candidate as they were still counting votes.)

Here, I hovered over the Biden line, trying to decipher the secret code in these lines: 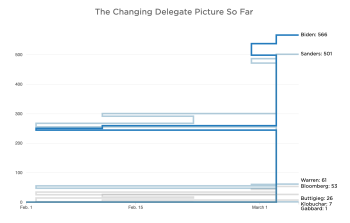 Here is what happened so far in the Democratic primary: 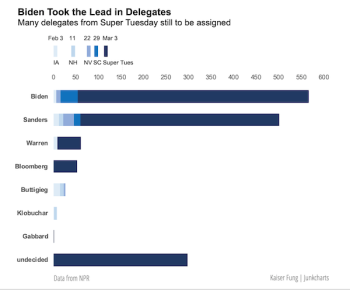 The key tradeoff the designer has to make here is the relative importance of the timeline and the total count. In this chart, it's easiest to compare the total count across candidates as of the Wednesday morning, then to see how each candidate accumulates the delegates over the first five contest days. It takes a little more effort to see who's ahead after each contest day. And it is almost impossible to see the spacing of the contest days over the calendar.

I don't use stacked bar charts often but this chart form makes clear the cumulative counts over time so it's appropriate here.

Also, the as-yet-unassigned delegates is a big part of the story and needs to be visualized.

P.S. See comment below. There was a bug in the code and they fixed the line chart. 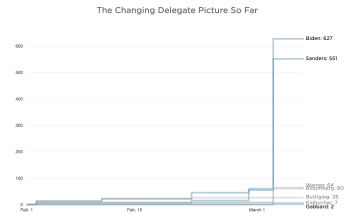 So, some of the undecided delegates have been awarded and comparing the two charts, it appears that the gap went down from 105 to 76. Still over 150 delegates not assigned.

I think this must have been a coding error when the chart got posted. It's corrected now & you can see how some of the lines have now been resolved into a pretty-easily understood line chart.

TTD: thanks for the heads up. I added the fixed chart to the post.