Junk Charts
Welcome Twitter About Book Blog RSS
It's impossible to understand Super Tuesday, this chart says
Proportions and rates: we are no dupes

Comparing chance of death of coronavirus and flu

The COVID-19 charts are proving one thing. When the topic of a dataviz is timely and impactful, readers will study the graphics and ask questions. I've been sent some of these charts lately, and will be featuring them here.

A former student saw this chart from Business Insider (link) and didn't like it. 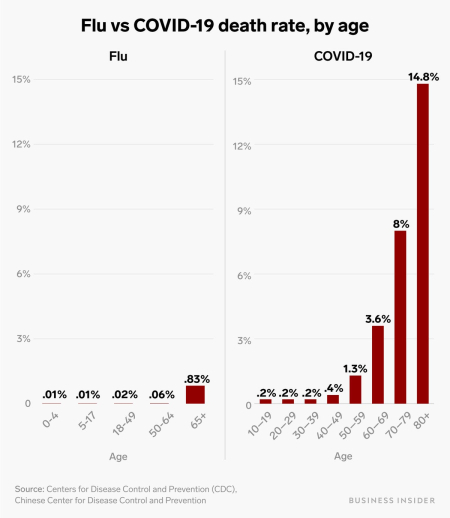 My initial reaction was generally positive. It's clear the chart addresses a comparison between death rates of the flu and COVID19, an important current question. The side-by-side panel is effective at allowing such a comparison. The column charts look decent, and there aren't excessive gridlines.

Sure, one sees a few simple design fixes, like removing the vertical axis altogether (since the entire dataset has already been printed). I'd also un-slant the age labels.

A primary challenge is dealing with the different definitions of age groups across the two datasets. While the side-by-side column charts prompt readers to go left-right, right-left in comparing death rates, it's not easy to identify which column to compare to which. This is not fixable in the datasets because the organizations that compile them define their own age groups.

Also, I prefer to superimpose the death rates on the same chart, using something like a dot plot rather than a column chart. This makes the comparison even easier.

Here is a revised visualization: The contents of this chart raise several challenges to public health officials. Clearly, hospital resources should be preferentially offered to older patients. But young people could be spreading the virus among the community.

Caution is advised as the data for COVID19 suffers from many types of inaccuracies, as outlined here.

Per thousand or per hundred thousand would be a useful way of writing small numbers as an alternative to the awkward 0.01%, but by this stage in the redesign you've stopped writing such numbers.

derek: That's a tough call so it's good to hear what others think. The impetus of the per thousand/hundred thousand scale is the presumption that people have trouble comprehending fractions of a person. So 1 in a 1,000 seems more intuitive than 0.1% or worse 0.001. And this presumption might be wrong. On second thought, I could have added a couple of data labels on there as well.