IGNITE National put out a press release saying that Gen Z white men are different from all other race-gender groups because they are more likely to be or lean Republican. The evidence is in this chart: 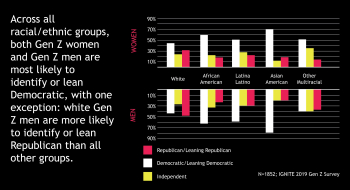 Following our Trifecta Checkup framework (link), let's first look at the data. White men is the bottom left group. Democratic = 42%, Independent = 28%, Republican = 48%. That's a total of 118%. Unfortunately, this chart construction error erases the message. We don't know which of the three columns were incorrectly sized, or perhaps the data were incorrectly weighted so that the error is spread out between the three columns.

But the story of the graphic is hanging by the thread - the gap between Democratic and Republican lean amongst white men is 6 percent, which is smaller than the data error of 10 percent. I sent them a tweet asking for a correction. Will post the corrected version if they respond. 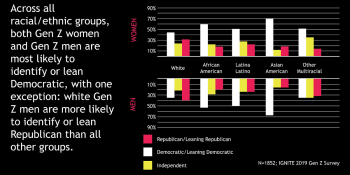 Now, the data for white men are: Democratic = 35%, Independent = 22%; Republican = 40%. Roughly 7% shift for each party affilitation so they may have just started the baseline at the wrong level when inverting the columns.

The Visual design also has some problems. I am not a fan of inverting columns. In fact, column inversion may be the root of the error above. 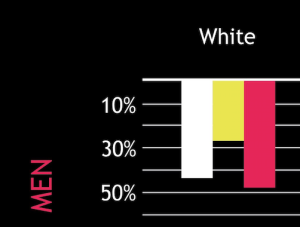 Let me zoom in on the white men columns. (see right)

Without looking at the legend, can you guess which color is Democratic, Independent or Republican? Go ahead and take your best guess.

For me, I think red is Republican (by convention), then white is Independent (a neutral color) which means yellow is Democratic.

Here is the legend:

So I got the yellow and white reversed. And that is another problem with the visual design. For a chart that shows two-party politics in the U.S., there is really no good reason to deviate from the red-blue convention. The color for Independents doesn't matter since it would be understood that the third color would represent them.

If the red-blue convention were followed, readers do not need to consult the legend.

In my Long Read article at DataJournalism.com, I included an "unspoken rule" about color selection: use the natural color mapping whenever possible. Go here to read about this and other rules.

The chart breaks another one of the unspoken conventions. When making a legend, place it near the top of the chart. Readers need to know the color mapping before they can understand the chart.

In addition, you want the reader's eyes to read the legend in the same way they read the columns. The columns goes left to right from Democratic to Independent to Republican. The legend should do the same!

Here is a quick re-do that fixes the visual issues (except the data error). It's an Excel chart but it doesn't have to be bad. 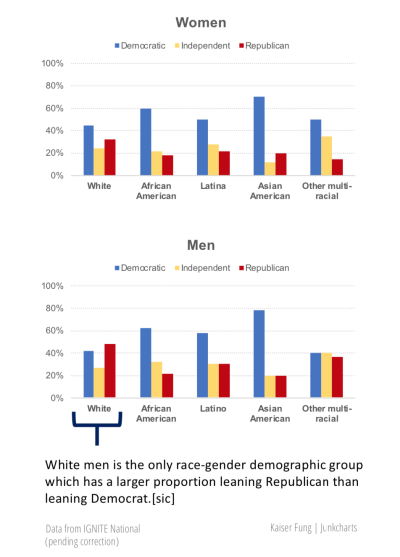